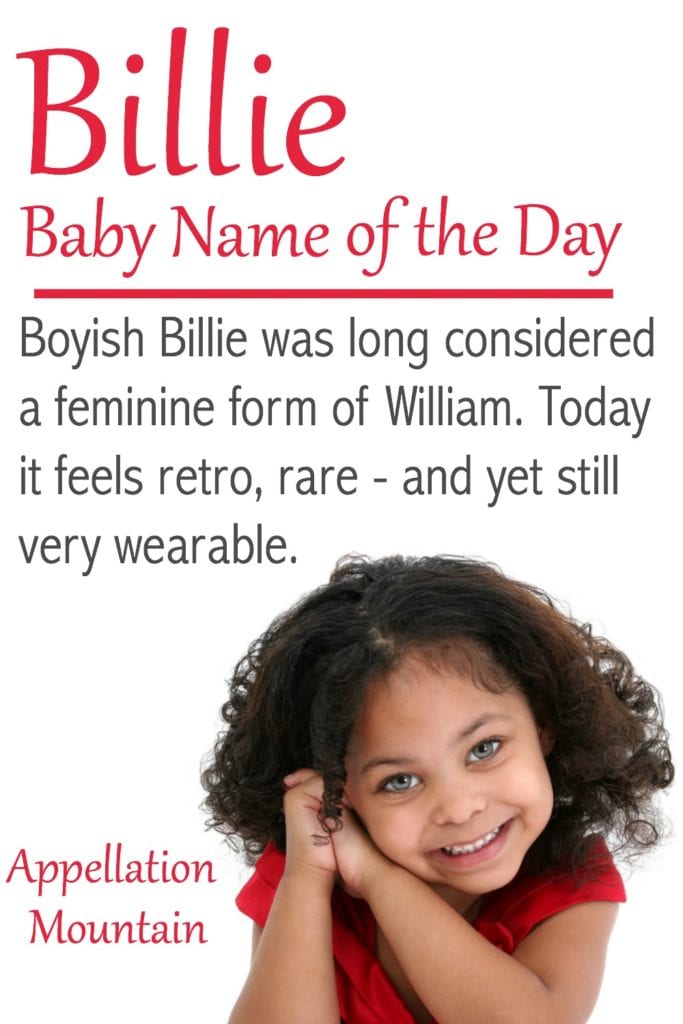 We’re wild about Willa and Ellie, so how ’bout Billie for a girl?

Billie: By the Numbers

First things first: this absolutely can be a boy’s name.

But it’s almost always short for William, which is nearly never given to girls. Feminine Wil- names include elaborate Wilhelmina, rising favorite Willa, and modern spin Willow. For many years, that list also included Billie.

Molly nearly always takes a y, while Millie usually appears with an ie. But standardized spellings are relatively new. Sally and Sadie, Lily and Lillie, and more have traded places as the preferred form.

It’s easy to insist on a single spelling in our digital age; but for most of human history, handwriting – and human error – made that less true.

You’ll find women and men using Billie as their given name during the nineteenth century.

Tennis star Billie Jean King had become a force by the early 1970s. In 1973, former tennis star Bobby Riggs insisted that the gap between men’s and women’s tennis was so great that he could defeat any current female champ. Ms. King took on the challenge, and roundly defeated Riggs.

She has remained in the public eye, advancing the sport of tennis and women’s status in sports, ever since.

Then came Michael Jackon’s 1983 massive hit single, “Billie Jean.” It’s not about the tennis player in any way. It’s one of the reasons Thriller remains the best-selling album of all time. The video also became a major success.

The song ties the name to the 80s.

You might also think of 1985’s The Legend of Billie Jean. Before she played Supergirl, Helen Slater portrayed a teenage girl from the wrong side of the tracks who stands up for what’s right and becomes a local hero. You can catch highlights of the flick in Pat Benatar’s video Invincible, the movie’s theme song.

No wonder the name has faded. In 2015, just 95 girls were given the name. And yet, there are reasons it still works today. Consider:

Add in characters on Charmed and American Horror Story, and this name has never really disappeared.

Today, it fits in with Ellie, as well as many of the retro Sadie names.

If you like your names boyish, retro, and rare, Billie could be the right choice for you.

Would you consider this name for a daughter? Or do you prefer it as a nickname for Wilhelmina or another Wil- name?