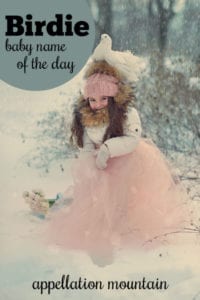 Our Baby Name of the Day is inspired by Jessica Simpson’s rumored baby name.

The word bird comes from the Old English bridd, which originally referred to  chicks – young birds. It’s not clear where bridd came from, but by the 1400s or so it was the word bird as we recognize it today.

It’s referred to young women for longer than you might think, too – maybe related to the word burde, for maiden or bride, or maybe from the creature. But then we forgot about all that, and during early twentieth century “bird” became slang for a young woman anew.

That’s not an argument for making it a name, of course – we don’t use Dame or Lass. But it might explain – in part – why we tend to think of avian appellations as feminine.

So what might make Birdie a baby name? It connects to plenty of traditional choices:

A former First Lady used it, too. Claudia Alta Johnson, wife of 36th President of the United States, Lyndon B. Johnson, acquired the nickname as an infant, and it stuck. Her marriage certificate lists her name as Bird Taylor.

Men use the nickname, too. Think of jazz musician Charlie “Bird” Parker, or a handful of athletes.

But does it stand on its own?

Here’s one reason it does: Bird and Byrd appear as surnames. They’re almost certainly derived from bridd. It might be a nickname based on a bird-like appearance, or it could refer to someone who worked with birds. In other cases, it’s a translation of surnames from various languages that also referred to our fine-feathered friends.

There’s basketball great Larry of the Celtics, polar explorer Admiral Byrd, and dozens of others.

But that’s Bird. How ’bout Birdie?

While early data may be unreliable, it’s clearly in use – fairly mainstream use, too. That puts in the same category as sassy nickname names like Sadie and Millie.

Pop culture backs that up.

Lois Lenski penned Newbery Medal-winning novel Strawberry Girl in 1945, the tale of strawberry farmers in Florida, who find themselves in conflict with their neighbors. There’s a minor figure in William Faulkner’s novel The Reivers, too.

A handful of actors and others back that up, too.

Birdie: By the Numbers

Beginning in 1915, and lasting for a decade, around 250 girls received the name every year. That’s peak Birdie.

It declined in use sharply, becoming all-but extinct by the 1980s.

And then the trend slowly reversed. In 2000, seven girls were given the name.

While it’s still well outside of the current Top 1000, it’s trending upwards – and fast.

Busy Philipps gave the name to her daughter in 2008. Now Jessica Simpson’s baby shower photos suggest she’ll do the same for her daughter, due in 2019.

There’s a character in the third season of Orange is the New Black called Berdie. And there’s a young British recording artist who answers to Birdy, even though her birth name is Jasmine.

So there’s no shortage of places parents might hear this name, and there’s plenty of history to argue this name counts more as a vintage revival than a newfound discovery.

If you’re considering Wren and Lark – or maybe Maisie and Hattie – Birdie might belong on your shortlist.

Would you consider this name for a daughter? As a nickname, or as a stand-alone?