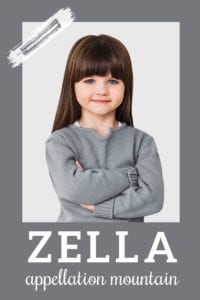 The baby name Zella travels the globe, but ends up feeling like Top 100 favorites in the US … with a twist.

Thanks to Lys for suggesting our Baby Name of the Day.

FROM EVERYWHERE AND NOWHERE

You might’ve spotted the baby name Zella on a naming forum. It’s easy to imagine someone inventing it.

Except possible origins and meanings for this brief, simple name abound.

It could be short for Marcella, Isabella, Gisela, or many other names with an ‘s’ or ‘z’ and -ella at the end. Even names like Ursula and Cecilia don’t quite offer the spelling, but do suggest the Zella sound.

It occurs as the name of an oasis in Libya. In Germany, there’s Zella-Mehlis, along with Altzella and Neuzelle. Zelle translates to cell, and seems to indicate a former site of a monastery – or, at least that’s the case for Altzella.

There’s a Zella, Texas, too. But the Texas city was named for Zella Bland, daughter of one of the founders. It was growing in the 1910s, enough to boast a post office, school, and hotel. But it’s now considered a ghost town.

Several sites list Zella as a Bangi name with an amazing meaning: one who knows the way.

Except Bangi is an almost extinct language, dominant in the Congo region until the arrival of Europeans, but then fading from the nineteenth century onwards. Lingala is the version of the language spoken in the region today. Lingala names lists are in short supply, and none of them include the name Zella.

Still, it’s a big continent and a complex web of languages, and some Lingala first names – Lola, Zuna – sound like they could fit neatly with the first name Zella.

It’s tempting to connect the name to zealous, via the Latin zelus. The meaning appeals, but this might be folk etymology rather than an origin for the name.

That said, the name is sometimes spelled Zela, which looks a little closer to zealous.

Others connect the baby name Zella to Yiddish names, like Zelig and Zelda. This suggests another lovely meaning: happy.

Some Italian nicknames and surnames end with -zello and -zella.

That leads to a number of people answering to the surname Zella or Zello.

There’s a bakery called Zella’s in New York, and a pizza place named Zella’s in Baltimore, both inspired by a the last name Zella – or something like it.

Zala is a favorite in Slovenia, where it is sometimes short for longer names, like Rosalia. It’s easy to imagine Zala and Zella sharing the same space.

And the there’s the Old Testament ZIllah. The name means “shadow” in Hebrew.

That’s almost certainly why Zoe Marriott chose it for her 2007 re-telling of Hans Christian Andersen’s “The Wild Swans.” The Swan Kingdom introduces a heroine named Alexandra, and an evil enchantress called Zella. When the two meet, Alexandra remarks that Zella is an old word for shadow.

That’s a lot of potential Zella name meanings, many of them appealing.

By the late 1980s, the name approached obscurity. But as all of the -ella names revived, so did the baby name Zella. As of 2021, 183 girls received the name. That’s beyond the current Top 1000, but far from extinction.

Some of this simply comes down to sound. In the nineteenth century, ends-with-ella was a big category. Think Ella, Stella, Della, Estella (as in Great Expectations), Bella, Luella, Rosella, Nella, and plenty of others. Zella fit.

Here’s a fun find: once upon a time, the half-way mark between Los Angeles and Chicago on Route 66 was marked by a cafe called Zella’s, operated by a woman named Zella Prin. It’s still there, now known as the Midpoint Cafe. It’s the model for Flo’s V-8 Cafe in Disney-Pixar favorite Cars.

Zella Day is a singer-songwriter, known for performances with Lana Del Rey.

Gospel singer Zella Jackson Price is another American singer by the name.

All of this makes Zella a rarity, but one with a vintage vibe. There are just enough nineteenth century women with the name to make it feel every bit antique as it does modern.

Still, it brings to mind names like Xela and Zellah, ones that do seem more like modern inventions.

Name your daughter Zella and you risk repeating, “No, not Stella. Zella-with-a-Z.” But this is the kind of name that’s just one high-profile use away from catching on. In fact, the name’s popularity continue to grow.

For parents wild about the -ella names, but eager for something just slightly different, the baby name Zella is one to consider. It’s familiar and mysterious, sophisticated and approachable – a study in contrasts, with a meaning and origin story to please everyone.

What do you think of the baby name Zella? 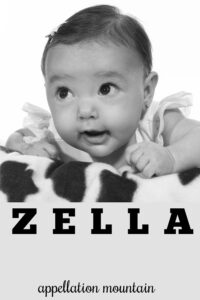 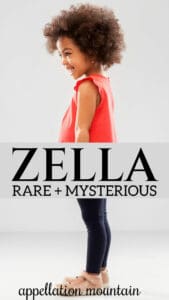