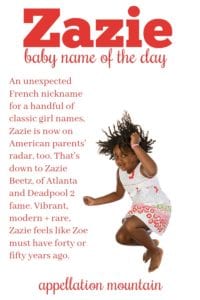 Zazie sounds like an invention, but this French name carries classic roots.

Thanks to Janelle for suggesting our Baby Name of the Day.

It turns out this name evolved from at least two different, equally traditional girl names.

The first is Isabelle. If you know your name history, you’ll recall that Isabelle and Isabella reigned as the more popular versions of the Biblical name, pretty much until the first Queen Elizabeth of England arrived on the scene. Both forms were known; and in some cases, women were recorded as Isabel one place, and Elizabeth another. If you listen to a French speaker pronounce Isabelle, the ‘za’ sound comes through loud and clear.

But then I checked Meilleurs Prénoms, and they confidently link this name to Frances instead. It’s not a stretch to imagine the -ces leading to this nickname, either.

The first major use of Zazie as an independent name seems to have come quite late, in 1959. French author Raymond Queneau penned Zazie dans le métro. A year later, Louis Malle adapted it as a film.

In the book, she’s nearly a teenager. But in the movie, she’s more of a Ramona Quimby character. Either way, the story marks her first adventure in Paris. Her mom is off with a new boyfriend, leaving Zazie in the care of her aunt and uncle.

There’s a transit strike in the city, but despite – or maybe because of – the confusion, our plucky heroine manages to see all the city has to offer.

The book and movie both hit it big, and they sparked a trend: to speak Zazie. Queneau used colloquial language for his characters – street slang, also called neo-French.

But even as they imitated her speech, few parents – if any – passed down the character’s name. (At least not on birth certificates. Given France’s naming laws, I assume it wouldn’t have been permitted anyway.)

One example of the name’s success as a nickname? The mononymous singer Zazie, born Isabelle de Varennes in 1964. And yes, she’s known particularly for her use of language, making it a very appropriate choice. (One example? Her song “Homme Sweet Homme,” playing on the English word home and the French word homme – man.)

The singer’s first big success came in the mid-1990s. The pop rocker has continued to record, while also composing music for movies and serving as a coach on the French version of The Voice.

But the reason we’re talking about this name now comes down to one woman: German-American actress Zazie Beetz.

Her dad is German; her mom, American. She was born in Berlin before moving to New York during elementary school. Her bachelor’s degree is in French, so I’m guessing she is seriously good with languages!

Beetz’ breakout role came in 2016, when she was cast as Vanessa “Van” Keefer in FX’s Atlanta. The character is biracial, Afro-German – just like the actress. Van and Earn – Donald Glover’s character – are in an on-again, off-again relationship, and parents to daughter Lottie. The show, currently in its second season, has racked up the award nominations.

If you aren’t watching Atlanta, then maybe you’ve seen Deadpool 2? Beetz played Domino. Her superpower? Luck. Deadpool argues that luck isn’t a superpower, but Domino confidently asserts that it is – and sure enough, she pulls all sorts of implausible feats without a scratch.

She also played Sophie in 2019’s Joker, the lauded supervillain origin story that won many an award.

With Beetz’ career continuing to heat up, the name could be heard more and more.

Zazie: By the Numbers

One fictional character, plus two real women? That’s not a lot of use, and the numbers reflect it. While there are some girls with the given name in France in recent years, the number is small.

In the US, it had never registered in the US data set at all.

Then came 2018, with Deadpool 2 and the second season of Atlanta. Sure enough, nine girls received the name that year.

Of course that doesn’t actually mean there were zero prior to 2018, because this name does appear on The Incredibles production babies list. But there’s clearly a tiny uptick.

File Zazie with the undiscovered gems.

It could be the coolest, unexpected nickname for Isabelle, Elizabeth, or Frances.

Or it might stand on its own, a successor for Zoe and Zoey, an alternative to Zadie and Zelie.

Either way, it’s a vibrant, upbeat, and thoroughly modern choice that might be just right for parents after something high-energy and unconventional.

Do you like Zazie better as a nickname or an independent name? 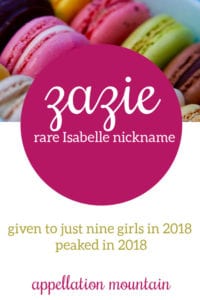