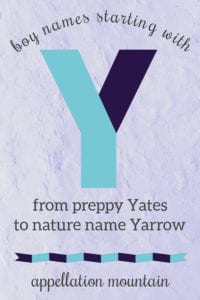 In fact, Y ranks 23rd out of 26 in terms of most popular first initials. It’s not dead last, but that’s still a far cry from letters like A, M, and J that offer so many options you could name a dozen children without missing a beat.

Multiple boy names beginning with Y do appear in the current US Top 1000, though they’re all ranked above 500.

That said, if you want a really distinctive name for your child, starting with a neglected first initial isn’t a bad strategy.

The typical Arab form of Joseph – and the most popular of the boy names beginning with Y.

One of several international forms of Joseph, this one Hebrew.

Also spelled Yehudah, this is the Hebrew form of Judah.

Another form of Joseph, heard in Persian.

A Spanish name boosted by a Mexican celebrity.

The Yiddish form of Israel. The I spelling remains far more popular.

A Hebrew form of Jacob.

The Spanish form of a Hebrew name, Yadiel means “praise of God.”

An Old Testament name, Yael is typically feminine, including is Israel. American parents prefer it for boys.

Yet another of the many international forms of John, this time used in Arabic as well as Persian.

A preppy surname name inspired by an Ivy League institution.

Yet another surname derived from John, this time via the Dutch Jan or Yan.

The Greek form of John.

As a place name, Yardley originally referred to a clearing good for gathering lumber. Today it sounds like a polished and unexpected surname option.

A possible nature name, borrowed from the herb.

File Yates with Brooks, Hayes, Wells, and other stylish surnames ending with s.

A place name whispered down the alley from its original form, York likely first referred to yew trees.

What are your favorite boy names starting with Y? 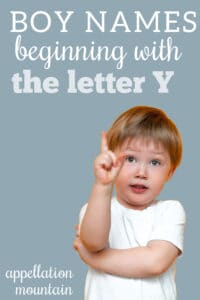