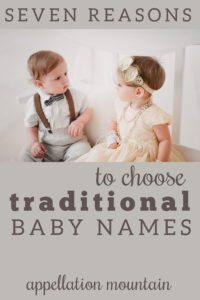 Classic baby names have stood the test of time, and yet parents sometimes hesitate to use them. Is Margaret too heavy for a child? Would Theodore rather have a more current name, like Logan or Jax?

When names like Kinsley and Maverick rank in the national Top 100, it’s easy to imagine that traditional names will be the odd-ones-out on the playground. But it isn’t so. There are plenty of great classic baby names that will wear beautifully in 2022 and beyond, and lots of good reasons to consider them for your child.

What makes a classic name? There’s no set definition. but if you’re looking for traditional choices that have enjoyed steady use over the past hundred years or more, check out these lists:

And if that’s exactly the kind of name you love, read on for seven reasons to love classic baby names.

NOT EVERY CLASSIC NAME IS WILDLY POPULAR

If you prefer classic baby names, the good news is that many of them are relatively uncommon. Margaret doesn’t crack the current US Top 100. Neither do Edward, George, or Adelaide. Catherine with a C has been out since 2002. (Though Katherine with a K is more popular.)

Even former #1 favorite Mary has slipped out of the Top 100. While John remains near the top of the charts – and is still broadly influential – the name is much less common than ever before.

Choosing a classic name doesn’t mean sticking with a short-list of oft-repeated choices likely to be shared. In fact, the opposite is often true!

Okay, some names are relatively rare. But you love Elizabeth and Eleanor, Henry and James. Those names are Top 100 picks, with James ranking in the current Top Ten. Isn’t it the worst of both worlds – to have a traditional name that you’ll probably have to share?

Not so fast. While your son James or daughter Elizabeth will inevitably meet others with the same name, that’s not quite the same as being one of three in your kindergarten. Gone are the days of five Marys and six Johns – or three Ashleys and two Jasons – in every class.

It’s not an isolated event, either – it’s a trend. This means that even though your child might join a great many Williams or Carolines throughout history, there’s no reason to think that classic baby names are more likely to repeat than any other kind of name.

Of course, even if your Charles is one of two or more, he doesn’t have to blend in. Most classic names offer nicknames galore. Charles could be Charlie, or Arlo or Chase or Huck.

Nicknames help if you’re handing down classic baby names over the generations. Grandma Peggy and granddaughter Daisy can both be Margaret without any confusion.

It’s also an opportunity to reinvent names. Love your grandpa Richard, but can’t imagine having a son called Rick? How ’bout Hardy, an unconventional nickname based on the name’s second syllable?

The opportunities for reinvention are almost limitless, and we tend to be more forgiving of such choices with classic baby names, if only because it’s been happening for generations.

Your child may prefer different versions of his classic name at different ages. But the name itself is timeless. If your name is Gary or Jennifer, Linda or Mason, we can guess your age with a high degree of certainty. Gary and Linda are the grandparents; Jennifer, the mom, and Mason is almost certainly the bouncing baby boy.

Now consider these names: John and Sarah, Elizabeth and Thomas.

If you’re hoping for a name that will age well, then classic baby names are a great choice. They’re familiar to us as names for children, adults, seniors, and every age and stage in between – proof that the name will never feel dated.

You didn’t name your daughter after the character – heck, you’d never heard of the book/show until others starting asking you, “Oh … like the book?” And you frown and explain that your daughter was born six months before the book came out, and …

Okay, that really doesn’t happen all that often. But choose classic baby names and it’s a worry you can take off the table. Heroes and villains and people of every possible description have already answered to Louis and Anna and Emily and Daniel. The name can’t be tainted by the latest pop culture phenomenon.

Once you’ve chosen a classic first name, anything goes in the middle spot. Anna Daffodil, Matthew Pendragon, Mary Afton – why not?

Whether it’s a family name, a rarity you’ve always loved, a choice inspired by a fictional character or song, or something else entirely, choosing classic baby names as first means that nearly any name works in the middle.

GREAT FOR A REASON

There are often worthy namesakes over the span of centuries who have answered to classic names. Think John the Baptist and John Lennon.

Some of it comes down to chance – the languages and cultures that dominated in the history books are also those that gave us their versions of classic names to embrace.

But it feels like there’s something else there – an elusive quality that makes a classic name feel so timeless. Harold has come in and out of fashion, but William has been with us steadily for well over a century. While we can’t explain why classic names feel like keepers, there are some names that simply endure.

So if classic baby names appeal to you, embrace your timeless style!

Do you like classic baby names? Which are your favorites?