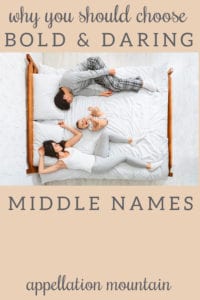 Middle names can transform a traditional first, honor a loved one, recognize your heritage, celebrate an important part of your life.

With so much power and appeal, why not go big with middle names?

Like the mighty Oreo, the filling in the middle can make all the difference.

For some parents, it is as easy as using a family name, whether it’s as classic as James or as unexpected Algernon.

But there’s a certain magic to big – BIG – middles.  Choices like Algernon and Luscinia are the Double Stufs of cookie-dom, with more than you expect awaiting.

They’re a delight to name enthusiasts, but going big can be useful for lots of reasons.

If you’re consider a daring middle, here are seven reasons to go for it!

Fretting that your daughter will dislike answering to Scheherazade?  Doubtful that anyone will ever spell Aloysius correctly?  Concerned that everyone will shorten Elsinore to Ellie, no matter what your preferences may be?

A name that you find extravagant – or even outlandish – might be easier to wear as a middle.

Paired with a more mainstream first, these daring middles make a for a full name that’s unforgettable.

Which one is more memorable: Ava Grace or Ava Berlin? William David or William Deveraux?

There’s nothing wrong with the first two combinations, but if you’re using a fairly common given name, a bigger, more daring middle can make the whole name more interesting.

You love Caradoc. He’s all about James.

One feels rare and maybe a little cumbersome. The other, familiar and often-heard. But together, James Caradoc is perfection.

Or maybe you’re the only grandchild in your generation with a hope of having a daughter, and your entire family is really hoping you’ll pass down family name Edwina, and you’d like to oblige. But Sloane Edwina, Maren Edwina, or even Elena Edwina allows for a mix of tradition and style.

If there’s pressure to use a name that doesn’t quite suit, the middle makes a convenient hiding spot.

Even if the rhythm isn’t exactly perfect, this approach still works. After all, that’s the textbook definition of a compromise, right?

IT MAKES A STYLE STATEMENT

Are you drawn to names like Bluebell or Steadfast or Keats, but suspect they’re just too out-there?

There’s nothing wrong with choosing unusual names.  But you know your family best.  If strike you as over-the-top, then tuck him in the middle spot.  Parker Atlas and Paloma might be exactly the right combinations.  The middle names add an extra oomph, something that surprises, but doesn’t need to be constantly explained.

IT TURNS YOUR CHILD’S NAME INTO A STORY

Maybe it’s Thackeray in honor of your favorite poet or Majorca for your honeymoon destination. A marine biologist’s child might be Ocean. Angelina Jolie and Brad Pitt chose Shiloh Nouvel, the middle name inspired by an architect admired by Brad.

There’s a story there, and it could be quite the fun one to tell – especially because, unlike a first name, you only have to tell the middle name story some of the time.

IT COULD COME IN HANDY

While plenty of us never use our middles, many a famous writer, artist, or other talented person is known by their middle exclusively. Maxfield Parrish was born Frederick Maxfield Parrish. Dashiell Hammett’s given name was Samuel. In both cases, their middles were family names.

Yes, there are families of artists and musicians.  (Think of Rufus Wainwright, son of Loudon, brother to Martha, uncle to Arcangelo, and father to Viva.  Musical talent and a penchant for off-beat names must run in their blood.)  But there are also accountants and dentists who are astonished that their children grow up to be sculptors and dancers and such.

A daring middle is a ready-made stage name, a possible alternate identity if your Jane feels like more of a Hermione.

We want so much from our children’s names nowadays.  Easy to say and spell, a nice balance of standing out and fitting in, meaningful but not burdensome … everyone’s list is different, but many of us have lists that are extensive, and hard to satisfy.

Thinking about your child’s full name – first, middle, and maybe even a bonus middle if you’re so inclined – can provide more options.

How did you approach choosing middle names?

First published on February 21, 2014, this post was revised substantially and re-published on January 6, 2021. 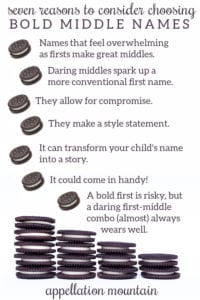