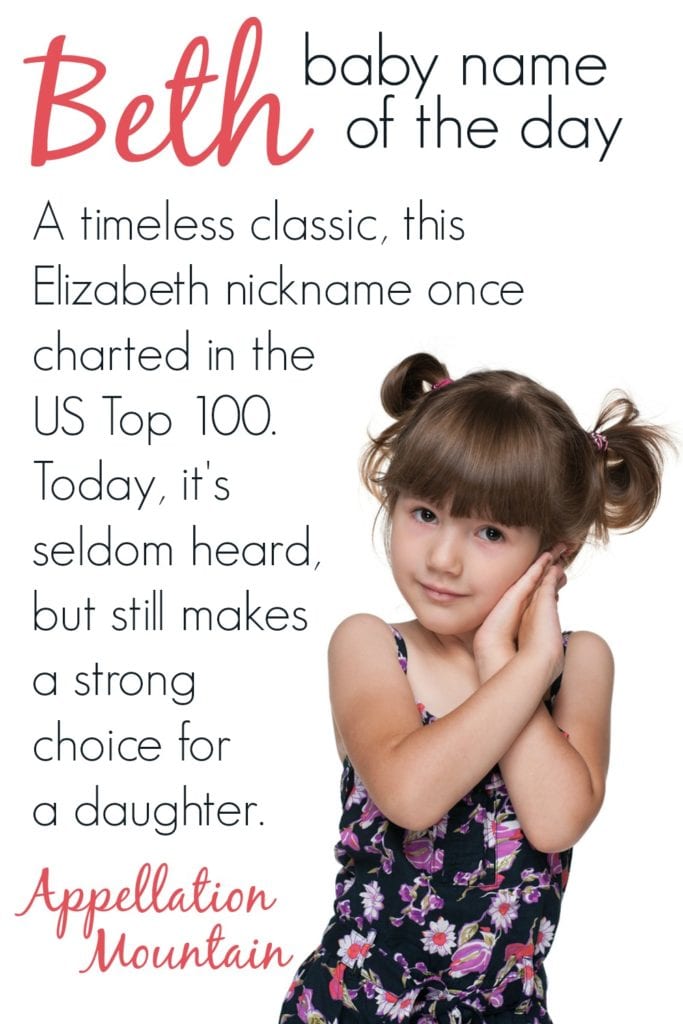 Beth possesses a quiet sensibility, a frills-free name with a straightforward sound. Why has this Baby Name of the Day all but disappeared from use?

Saintly and regal, Elizabeth comes from the Hebrew Elisheva – my God is an oath. Women wear the name in the Old and New Testaments; in the latter, she’s mom to John the Baptist.

Not until Queen Elizabeth I ascended the throne did Elizabeth eclipse Isabel in England, but other European languages used it far earlier.

There’s another name that might come to mind: Bethany, a Biblical place name, also from the New Testament. Boosted by names like Courtney and Brittany, it reached the US Top 100 in the 1980s. Beth means house; it’s also the second letter of the Hebrew alphabet.

Many women might have been Beth for short. But from the nineteenth century through 1990s, it also charted as an independent given name.

So have Betty and Betsy and Eliza and Libby, too, so maybe that’s no surprise.

Could credit go to Elizabeth Taylor? Her breakout role came in 1944’s National Velvet. By the 1950s, Taylor epitomized Hollywood glamour. And yet, Taylor preferred Liz.

Or is it Louisa May Alcott’s enduring 1868 novel Little Women? Both CBS and the BBC offered television adaptations in the 1950s. Even if you’ve never read the book, odds are you can rattle off the names of the four March sisters – Meg, Jo, Beth, and Amy.

Kind, shy, and selfless, the third March sister developed scarlet fever earlier in the story; while her sisters nurse her back to health, she is permanently weakened and – spoiler alert! – ultimately dies young.

The name peaked in the 1960s, the decade when Lisa – another Elizabeth off-shoot – topped the charts. It fits with other favorites from the decade, tailored names like Karen, Susan, and Michelle.

It faded slightly, but then came a power ballad from rock band Kiss. Titled simply “Beth,” the song started out as Beck. Sung by Peter Criss, the song’s roots are pre-Kiss. Back then, Criss belonged a band with a guy called Mike, who would make plaintive phone calls home to his wife, Becky. The lyrics were tweaked before Kiss recorded the version we all know.

With the refrain, “Beth, what can I do?” it would become Kiss’ highest-charting single in the US.

Or maybe not. Controversy about exactly who deserves credit for the hit persists.

What we know is this: the fading name reversed course and briefly returned to the US Top 100.

It didn’t last. As the song faded from the radio, the name slipped. Twenty years later, it left the US Top 1000 entirely.

Then came 2009 smash hit television series Glee. At the end of the first season, cheerleader Quinn gives birth to a baby girl called Beth. The song, performed by the baby’s father, inspires the baby’s name.

Despite the show’s wild popularity, it fails to encourage others to choose the name.

Likewise, a character on mega-hit The Walking Dead has failed to boost the name.

As of 2015, a mere 44 girls were named Beth. Maybe a few Elizabeths prefer the nickname, too.

That makes this a perfect stands-out, fits-in name. Everyone knows it; there’s even a built-in lullaby. But no one is using it.

Of course, the Th sound is rising once more, led by Theodore and company. Ruth has gained modestly in recent years, as has archaic word name Blythe.

If you’re after a simple, familiar, and timeless name that will be instantly recognized but seldom shared, Beth is one to consider.

Would you use this name for a daughter? Or do other forms of Elizabeth appeal more?