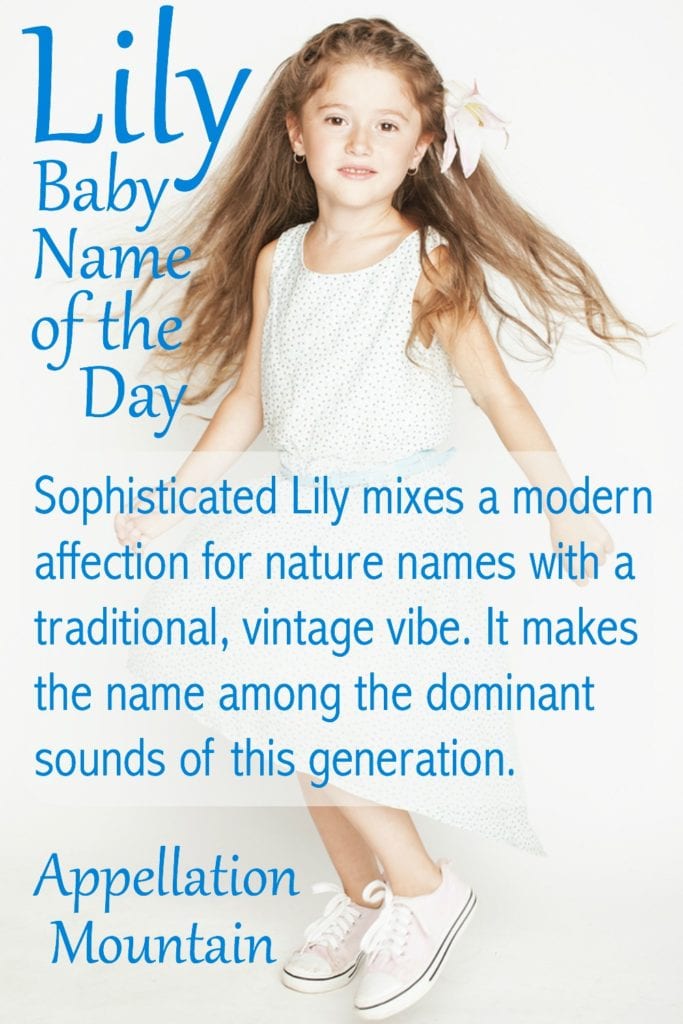 Lily stands as the most popular of the flower power baby names.

Top 100 month continues with this blooming Baby Name of the Day.

The flower name comes from the Latin lilium. Dozens and dozens of plants belong to the family, and even more are called lilies, even though they’re technically something else.

We often think of the white flowers associated with Easter, but they come in plenty of colors.

Today we accept that flowers can inspire children’s names, with rarer finds like Magnolia and Azalea appearing in the US Top 1000. But it wasn’t always that way.

Odds are that Lily first evolved as a short form of Elizabeth. The late KM Sheard made the case in this post at Nameberry. This means that Lillian developed from Lily, not the other way around.

We tend to think of Lily as a vintage gem. But here’s something curious: the name hovered in the 200s during the late nineteenth century. It never rose any higher, and by the 1960s and 70s, it left the rankings entirely.

Lilly – with a double L – shares the same trajectory.

This spelling ranked in the Top 100 into the 1920s. Lillie is the vintage gem, a closer cousin to Millie, Tillie, Billie, and Willie than the flower name.

Eventually their affair ended, and Mrs. Langtry needed another means of support. She took to the stage at the suggestion of her friend, playwright Oscar Wilde.

Langtry became a star, making a highly anticipated tour of the US in 1882-1883. I imagine she became the Kim Kardashian of her day, inspiring interest everywhere she went.

Of course, the name already ranked in the Top 50 when Mrs. Langtry’s acting career began.

In 1905, Edith Wharton gave the name to a character in The House of Mirth – but she used the -ily spelling.

The name faded in every spelling. It must have been considered offbeat when CBS series The Munsters debuted in 1964.

Perhaps the name was chosen because the flowers are often associated with funerals.

Instead, comedian Lily Tomlin probably deserves credit for the name’s revival. Tomlin took her stage name from mother Lillie Mae. She became a television regular in the 1970s, and by 1980’s 9 to 5 was a major Hollywood star.

The name reached the Top 100 in 2002. Factor in the popularity of many a Lil- name, and it’s one of the dominant sounds of our time.

The name brings to mind:

That’s the only downside to the name. It’s so familiar that it might feel a tiny bit expected.

And yet, there’s something lovely and strong about this one – a short, complete name with ties to the natural world, but a long history of use, too.

Would you consider this name for a daughter? Do you prefer it as a nickname?