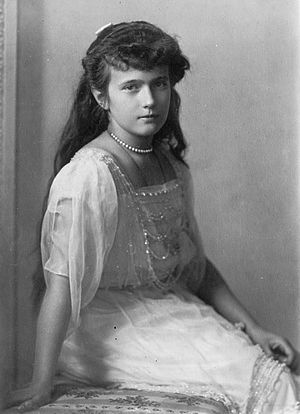 She has all the romance of a doomed Russian princess, plus plenty of peppy nicknames should your daughter prefer cleats to crinolines.

Thanks to Photoquilty for suggesting Anastasia as Name of the Day.

One of the earliest Anastasias is a saint, and that’s appropriate as the name comes from the Greek anastasis – resurrection. St. Anastasia is remembered by name in the Catholic mass. Little is known about her life, but she died in the Diocletian persecutions.

The name is Eastern leaning, and indeed many – but not all – bearers of the name are Slavic:

Then there’s Grand Duchess Anastasia Nikolaevna of Russia, fourth child born to the last Tsar of Russia. The entire royal family was murdered during the revolution. Then, in the 1920s, Anna Anderson surfaced. She claimed she’d survived the massacre with the help of a sympathetic guard. She died in 1984. Several years later, DNA testing proved that Ms. Anderson was not the ill-fated princess.

Her tale is irresistible, and it has been adapted for the silver screen more than once. In 1956, Ingrid Bergman played Anna Anderson in Anastasia; an animated musical version was released in 1997.

The name remains extremely popular in Russia and is heard worldwide. Anastasia has ranked in the US Top 1000 every year since 1963, and was also popular in the late 19th and early 20th centuries. Through the 1970s, however, short forms Stacy and Stacey were chart-toppers. Stacia and Stasia are modern variants; Anstice is a medieval version. The formal name has slowly risen and stood at #313 by 2007.

It’s not a surprise. All those Stacys grew up with girls wearing the full name. Lois Lowry’s Anastasia Krupnik series of young adult novels debuted in 1979. (They’re banned with some regularity, adding to their appeal.) In 1950, Disney dubbed one of Cinderella’s evil stepsisters Anastasia. Subsequent sequels have shown a kinder side to this stepsib, and she even gets prettier.