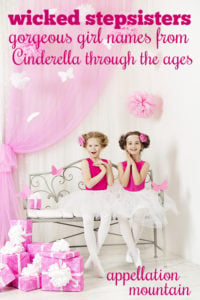 Do you know the wicked stepsisters’ names?

We all know the story of Cinderella. There’s a Pumpkin coach with footmen mice, the handsome prince and one glass slipper, left behind when the clock strikes twelve. An exhaustive search roils the kingdom, but it all ends happily ever after.

The tale originates in the ancient world, and we’ve reinvented it frequently. While our heroine’s name remains relatively stable, those wicked stepsisters? They’re named and re-named with nearly every new telling.

While most stories give us a deliciously self-absorbed duo, some writers cut the stepsisters to just one jealous competitor. And others make one of the pair more sympathetic, even a friend to Cinderella.

If you grew up with the Disney version of the story, this might take you by surprise. And the list of gorgeous girl names worn by wicked stepsisters? It’s much longer than you might guess.

Before we get to the sisters, it’s worth noting that the princess remains the same. She’s called Cendrillon in French and Cenerentola in Italian.  The Brothers Grimm named her Aschenputtel. They all translate to almost the same thing – a reference to ashes or cinders in the hearth, a name for a lowly servant girl.

Sometimes it is clear that this is a nickname, and not a very nice one. In other stories, it is the only name she’s given throughout the story. Most recently, from Disney’s live action reboot to Amazon’s 2021 musical version, her real name is Ella.

Anastasia and Drizella/Drisella – Maybe the best known version of the stepsisters’ names was popularized by Disney’s animated classic. The 2015 live action adaptation kept the names – and the sisters’ selfish, spoiled personalities. The ‘z’ spelling comes from the animated version, while the ‘s’ spelling appears in the live action one. Amazon’s 2021 reboot will also give us wicked stepsisters named Anastasia and Drizella.

Zelly and Stacy – Here’s a twist. A Disney+ version of the classic tale will give us a male Cinderella. Well, he’s Sneakerella, and his prince is Kira King, daughter of a sneaker empire magnate. The main character answers to El, and Zelly and Stacy are his just plain awful stepbrothers. Still, the names are unisex enough to make this list – and they’re clearly nods to Disney’s standard go-tos for wicked steps across the years.

Brianna and Gabriella – Hilary Duff played Samantha/Cinderella/Diner Girl in 2004’s A Cinderella Story. The sisters’ names are all pitch-perfect for California teenagers. This version adds a few twists. Brianna and Gabriella are twins, plus there’s a bonus mean girl, a cheerleader called Shelby.

Britt and Bree – There’s something fun about this duo – individually I wouldn’t notice them, but together, I rather expect them to be horrible!  When Selena Gomez stepped into the glass slippers for 2008’s Another Cinderella Story, these were her spoiled stepsisters.

Catherine and Jeanne – You might expect the most unusual stepsister names from Cinderella Monogatari, an Italian-Japanese anime version made for television in 1996.  But they went with the traditional – and plausible – Catherine and Jeanne.

Hattie and Olive – Ella Enchanted isn’t exactly a Cinderella story. Ella of Frell’s biggest problem is the gift of obedience, not a wayward glass slipper.  She does, however, have a pair of rotten stepsisters with these names.

Malvolia and Narissa – Camila Cabello plays an entrepreneurial Ella in the 2021 Amazon musical take on the tale. This time, her stepsisters answer to Malvolia and Narissa. The first sister’s name sounds like malevolent. Maybe the second is related to narcissistic?

Clorinda and Tisbe – This pair comes from the French opera by Isouard. The opera debuted in 1810, and was the favored version of the tale until Rossini’s Italian version came along in 1817.  Rossini kept the stepsisters’ names the same, but called his Cinderella Angelina.

Odette and Aloisa – A ballet version used these names. It was first performed in 1893 in St. Petersburg.  In Russian, Cinderella is Zolushka.

Noemie and Dorothee – In Jules Massenet’s 1899 opera, the stepsisters answer to these appealing names.

Araminta and Arethusa – Eleanor Farjeon re-christened the stepsisters with these lovely names. The Glass Slipper came out in 1944.

Birdina and Serafina – Back in 1955, MGM released The Glass Slipper, their musical take on the famous story.  Leslie Caron played the lovely Cinderella. Elsa Lanchester – famous as the Bride of Frankenstein – played her none-too-nice stepmother.

Della and Golda – During the 1960s, an off-Broadway production titled just Cindy gave these names to the stepsisters.

Portia and Joy – Rodgers and Hammerstein took a shot at a musical adaptation of the classic tale in 1957.  It was written for television, with Julie Andrews as Cinderella.

Venus and Olive – Years before Brandy played the princess, Cindy was an all-black production made for television, set in World War II-era Harlem. Venus and Olive were the stepsisters’ names. The actresses went on to far greater successes – Nell Carter played Olive, and Alaina Reed-Hall – you know her as Sesame Street’s Olivia – was Venus.

Clothilde – A 2010 Austrian reinvention of the story reduces the stepsisters from two to one. In the German-language Aschenputtel, there’s only Clothilde.

Domino and Taffy – In 1990, Jennifer Grey and Rob Lowe co-starred in an update to the story called If the Shoe Fits. Taffy and Domino weren’t wicked stepsisters. Instead, they’re Jennifer Grey’s awful roommates.

Florinda and Lucinda – Stephen Soundheim’s Into the Woods was a Tony Award-winning fairytale extravaganza in the 1990s. It features many a familiar tale, including Cinderella and her two stepsisters. This time, they’re Florinda and Lucinda.  The 2014 movie version kept the names.

Isobella and Palatine – A 1976 British production gave these names to the wicked stepsisters.

Marguerite and Jacqueline – You’ve probably seen Drew Barrymore’s turn as Cinderella-Danielle in 1998’s fairytale-inspired Ever After. Jacqueline was the nice stepsister, while Marguerite was as wicked as they come.

Pearl and Peony – These names come from Marissa Meyer’s Cinder, the first book in her fairytales-revamped extravaganza. Peony is a sweetheart. Meanwhile, Pearl is the traditional villain. 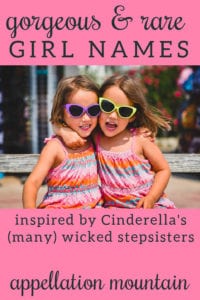 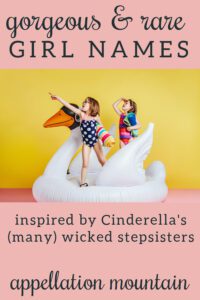