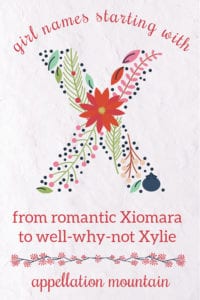 When it comes to girl names starting with X, the list is both very, very short … and surprisingly long.

While just two X names for girls chart in the current US Top 1000, dozens of possibilities exist. They come from other languages, from pop culture, and, of course, from our love of inventive spelling.

They don’t call it the X factor for nothing.

Even though X ranks 24th out of the 26 alphabet letters in terms of popularity, it’s a top Scrabble value letter. Parents love names starting with Z, and nearly any Z name might be respelled with an X. Zora becomes Xora, Zoe is Xoe, and even Zofia – a Slavic version of the Top Ten classic – is transformed into Xophia.

The possibilities are endless.

Let’s look at the girl names starting with X, from the (slightly) more familiar to the rare, but still (potentially) wearable.

If Xander is an Alexander nickname, then it follows that Xandra could come from Alexandra just as easily.

An ancient Greek name for a fair-haired daughter.

Maybe calling Xanthippe familiar is a stretch … but it was the name of Socrates’ wife and it’s related to Xanthe. It just goes to show how rare girl names starting with X really are.

A feminine form of Top 100 Xavier, though the Spanish Javiera or Italian Saviera might be more wearable.

Children of the 90s will recognize this name thanks to television’s Xena: Warrior Princess.

The patron saint of Saint Petersburg is one of several spiritually sigificant Xenias.

It might be a creative take on Mia, but Xia – pronounced with more of an S sound – is a Chinese name meaning summer.

A medieval Spanish name, Ximena was the wife of El Cid, an eleventh century knight famous for his victories in battle. It’s a familiar choice beginning with X, but in this case, the X sounds more like an H.

Guiomar surfaces in some legends of the Knights of the Round Table. It’s been whispered down the alley to Xiomara in Spanish, a beguiling possibility embraced by American parents in recent years.

Pronounced more like SHO cheech or even SHO chee, this name comes from Nahuatl, an indigenous language spoken in Central Mexico. It means flower.

It looks like an X take on Maya, and maybe it is pure invention. But it feels substantial. Poet Dennis Nurske authored Leaving Xaia in 2000.

There’s a Greek city called Chania, which is written Χανιά in the Greek alphabet. It’s located on the island of Crete, and it’s tempting to link the name Xania to this ancient city. It might also connect to an Arabic name, but odds are that many parents simply invent Xania as a mix of appealing sounds.

In 2011, a contestant on Mexico’s Next Top Model answered to Xareni. Mexican actor Silvia Manriquez welcomed a daughter named Xareni, too. No question the name is heard … but the origin and meaning seem elusive.

Xcaret doesn’t look like a name. It sounds a little like esh-caret. It’s a place name, and means “small inlet” in Mayan. Visitors to the Xcaret archeological site site can tour the ruins of a former trading center, dating from as early as the year 200 to as recently as the sixteenth century. There’s a neighboring park called Xcaret, too, known as an ecotourism destination.

In just two letters, this Chinese name contains a joyful meaning: happiness. Or caution, depending on the characters used to write the name. It’s pronounced chee.

Another name imported from Mexico, Xiadani may have roots in Zapotec, an indigenous language. It refers to a flower.

Another Chinese name, one that might mean trust, soul, or believe – among other things. It’s pronounced with a sh sound – sheen.

A gorgeous Zulu name with an equally appealing meaning: peace. Author Ibrahim X. Kendi – the X is for Xolani – put the name on parents’ radar.

As with so many girl names beginning with X, Xyla appears to be invented. But there’s an intriguing meaning attached, too. In Greek xylon means wood, and in the New Testament, it refers to the Cross on which Jesus died.

Kylie and Miley and Rylie, too – why wouldn’t Xylie follow logically? Maybe, though some try to connect it to the Greek xylon, too.

What are your favorite girl names beginning with X? What would you add to this list? 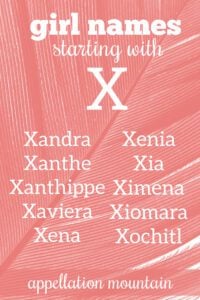 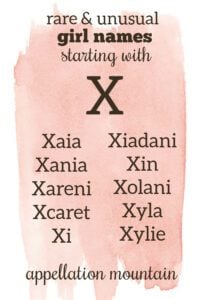 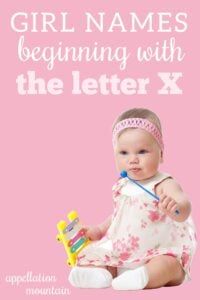