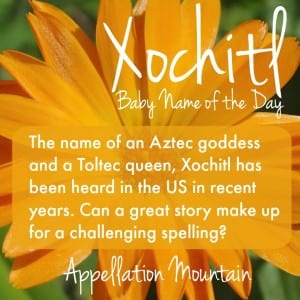 Today’s feature is a pan-botanical from down Mexico way.

Thanks to Katerina for suggesting Xochitl as our Baby Name of the Day.

Let’s start here, because the pronunciation of this name keeps tripping me up.

I’ve heard a crazy easy – and completely non-intuitive version – SO shee or SO chee. The latter brings to mind Sochi, Russia, the site of the 2014 winter games.

Except I’m not sure that’s quite right. When I listen to the pronunciations here, there is the tiniest ‘tl’ sound at the end. SO shee til. Except the first syllable almost sounds like SHO instead of SO.

This is a tough one!

In simplest terms, Xochitl is the Nahuatl word for flower. That makes it a pan-botanical choice along the lines of Flora, and no surprise that it’s been adopted as a girl’s name.

And while we’re simpling things up, Nahuatl is the language of the Aztecs. It’s been spoken in Central Mexico for centuries, dating back to the Aztec Empire. Over 1.5 million Nahua people still speak some form of the language natively, and there are administrative documents and literary works dating back to the sixteenth century, when Nahuatl was first written in the Roman alphabet.

Of course, the language as spoken today wouldn’t seem very familiar to the ancient Aztecs. There’s lots of Spanish mixed in to Nahuatl, and lots of Nahuatl words used in Mexican Spanish. Some of those have filtered into English. Hello, avocado, chocolate, coyote, and tomato.

Originally, the Aztecs used ideograms to express their ideas in writing.

The picture here is the sign – the signo – for Xochitl as it appeared on the calendar.

But it isn’t just a symbol. Xochitl is associated with Xochiquetzal, the maiden. She’s the goddess of fertility, and a protector of pregnancy and childbirth, as well as traditionally feminine arts, like weaving.

Birds and butterflies followed and marigolds blossomed where she walked, which makes me think of her as a sort of ancient precursor to Snow White.

While many nature names are newer, Xochitl isn’t one of them. In the early twelfth century, Xochitl was a Queen of the Toltecs, the second wife of Tecpancaltzin.

Legend has it that she led women soldiers into battle personally, during an outbreak of civil war. Xochitl lost her life on the battlefield, as did her son, the last of the Toltec rulers.

It’s quite the tale, and very likely true. It was enough to earn Xochitl a place in the Heritage Floor of Judy Chicago’s major work celebrating extraordinary women, The Dinner Party.

But it must have had a good run in Mexico, and throughout Central and South America, many names from indigenous peoples have become mainstream.

Outside of the Latino world, there have been a few opportunities to hear the name: a third season Flavor of Love contestant by the name, a brand of tortilla chips. There’s also a singer-songwriter named Xochitl, who pronounces her name Sochee, sort of like the Olympics place name.

It makes for an interesting puzzle. On sound alone, Sochee could be an intriguing English-Spanish crossover possibility. And the story behind this name is fascinating, from the goddess to the courageous queen. But the spelling seems guaranteed to confuse.

Still, Xochitl could make a bold an fascinating choice for parents celebrating roots in Mexico.

What do you think of Xochitl? Do you think it would wear well in the US in 2015?