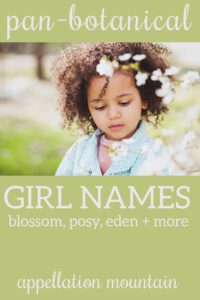 Botanical girl names gather up the whole garden. If you can’t decide between Violet and Daisy, this list might solve your dilemma nicely.

Unlike Lily or Rose, these nature names relate to flowers in general. Most of them lean feminine, but at least a few might work equally well for a son.

If you love nature names, but want something unexpected, this list is for you.

Anne Rice used this name for a minor character in The Witching Hour.  It likely is based on the Greek anthos – flower – a word that has influenced names from Anthony to Samantha.

Add an extra syllable, and Anthea feels like a quirky British appellation, just right for Lady Anthea Something-Something.  Greek goddess Hera was called Hera Anthea – Hera of the Flowers.  With fictional uses from Five Children and It to Agatha Christie to Skins, there is no shortage of places expectant parents could trip over this slightly botanical and utterly lovely choice.

While we tend to associate Calanthe with a specific type of orchid, the name’s meaning in Greek fits this list of botanical girl names perfectly: beautiful flower.

We borrowed this one from the Greek kylix – drinking cup.  It refers to the husk protecting the bud. The botanical term also has ties to Greek myth and anatomy.  In our age of Alex and Felix, it is easy to imagine Calyx as a boy’s name – or a frills-free name for a girl.

The second half of this name clearly means flower; the first half is debated. It could mean woolly, but it makes this list because we typically read it as “lover of flowers.”

Sometimes listed as the mother of the Graces in Greek myth, the name comes from a phrase that means blooming or flowering.  Eu means good and, as with Antha, the second half refers to flowers.  One of Jupiter’s moons is called Euanthe making this name celestial, too.

ANY FLOWER and EVERY FLOWER

Blossom inspired this post. Jazz singer Blossom Dearie began her successful career in the 1950s. Mayim Bialik played the title role on 1990’s sitcom Blossom. In the show, the character’s unusual name comes straight from Dearie – after all, Blossom’s dad was a musician.

From the Yiddish word for flower, blum.

Ever since a Harry Potter heroine rocked the French word for flower, parents have cautiously considered Fleur for their daughters. The Spanish flor might make another options, but Flor sounds an awful lot like floor. (Though double names, like Ana Flor and Maria Flor, might fix that.) Pronouncing the name can be tricky, but with a generation of future parents growing up on JK Rowling’s series, perhaps that’s less of an issue.

Fiorella might sound fiery, but it comes from the Italian fiore – flower. New Yorkers will think of former Mayor Fiorello LaGuardia.

In Ancient Roma, Flora reigned as a minor goddess, charged with flowers, spring, and fertility. The name soared in the Victorian era, and remained popular into the early twentieth century. While rhyming names like Nora and Cora have returned in rennet years, Flora remains seldom heard.

Stylish in the UK, Florence remains underused in the US. Former British prime minister David Cameron named his daughter Florence. But Americans seem to associate the name with the actress who played The Brady Bunch matriarch, Florence Henderson. And yet, if Alice and Frances make for fresh choices, why not Florence?

Spare, simple Hana looks like the former chart-topper Hannah. But Hana reflects Japanese roots, and means flower – though it can also be a spin on Anna (grace) or an Arabic name meaning happiness.

Many Hawaiian names nod to nature, and Leilani is no exception.  This names means heavenly flowers, and fits right in with L-intensive picks like Lila, Layla, and Lily.

The Albanian word for flower is pronounced LOO leh, but in the US, it might be misread LOO lee or even LOO lay. It appears to be use in Albania at least sometime,s but this one would still take some explaining in English. Still, Lucy and Luna have soared in recent years, so maybe Lule works, too.

Celeb baby namers extraordinaire Jamie and Jools Oliver gave this name to their third daughter, a little sister for Poppy and Daisy. Like Calyx, Petal identifies part of the flower, and is sometimes used as a term of endearment.

Nosegay and Tussie-Mussie fail as given names, and even Bouquet seems extreme. But Posy carries a similar meaning. Spelled Poesy, the name transforms into a literary term. Posy might also serve as a Josephine nickname. It fits right in with Sadie, Elsie, and many retro nicknames names in favor today.

Depending on your translation, Susanna either means lily, rose, or maybe even lotus. Because it potentially nods to not one, but three, flowers, Susanna makes the list of pan-botanical girl names.

The eldest Jolie-Pitt daughter’s name might mean shining, or possibly flower – which puts it on this list.

A flowering field visited by Ezra in the Old Testament – though it is more often spelled Ardath. It was briefly revived by a late nineteenth century novel.

Mostly in Catholic families, this name comes from a title for the Virgin Mary. But Carmel ultimately comes from the Hebrew word for garden, making this one of the pan-botanical girl names, too.

Arguably the most famous garden name ever, Eden feels like it belongs with the pan-botanical baby names.

From the Latin hortus, meaning garden. Hortense is climbing in use in France, but remains in style limbo in the US.

The Arabic word for garden or paradise, though it refers more specifically to the afterlife.

Most people will read Lea as a form of the Biblical Leah. But it can also refer to a pasture or meadow, which earns it a spot among the botanical girl names.

Not every meadow bursts with wildflowers, but it belongs.

Would you be more likely to use a flower name, or one of these pan-botanical girl names? 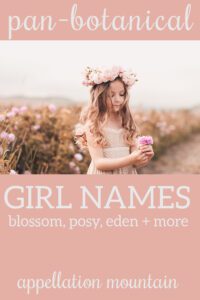