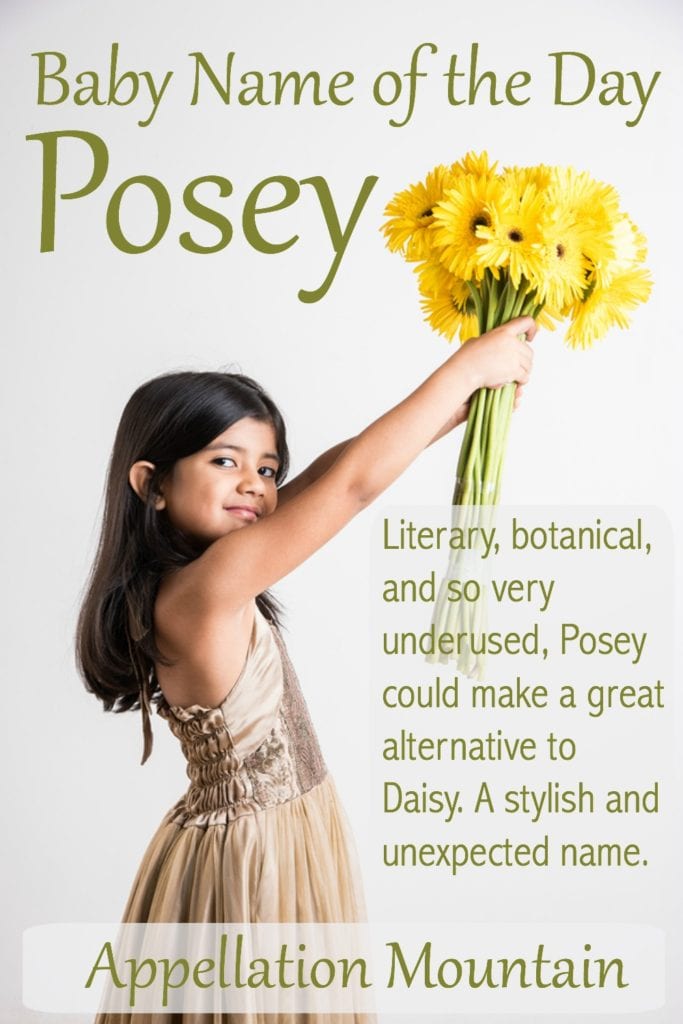 Looking for simple, sweet names for girls? Posey might be the one for you.

Our Baby Name of the Day was inspired by this post.

I first heard this name mentioned as a nickname for Josephine. That might seem odd or even awkward, but plenty of Joseph nicknames swap the ‘f’ for a ‘p’ sound. Think of  the Spanish Pepe or the Dutch Joop.

Perhaps it also evolved as an alternative to Rosie. British illustrator Rosemary Simmonds is known as Posy.

In our age of Sadie-not-Sarah and Molly-not-Mary, that would be enough to suggest this name works. But there’s so much more to Posey.

A small bouquet, often given as a gift and sometimes worn, can be called a posy. I’ve also heard tussie-mussie and nosegay used to refer to the floral arrangements, and vintage holders abound on Etsy and Pinterest.

The term may owe its origins to the language of flowers – the idea that one could compose a thoughtful message by choosing blooms with specific meanings.

That puts it in the company of other pan-botancial names, like Flora and Blossom.

Speaking of language, poesy originally referred to a short line of poetry. Think of the snippets we might engrave on something. Both poesy and poetry come from the Greek and Latin poesis. Poesie evolved in Old French.

Poesy might make a wearable spelling of the name, one that places it with Story, Fable, and other literally literary choices.

Of course, Posey also appears as a surname. Think of actor Parker or Teen Wolf’s Tyler.

It’s likely German in origin, from place names like Posa and Poserna, but I’ve seen other theories, too.

Posey: By the Numbers

Of the three possible spellings, none currently charts in the US Top 1000. In fact, Posy and Poesy have never ranked. Posey appeared just twice in the nineteenth century, and only for boys.

If not from flowers or poetry or a family name, where might parents hear this name?

Looking at the current rankings, Sophie and Daisy make the Top 200. Chloe and Zoe/Zoey are Top 50 favorites. Sadie rocketed into the US Top 50 a few years ago, and remains in heavy use. And P names aren’t just for television witches anymore. Penelope, Piper, Peyton, and Paisley all appear in the Top 100. And rhyming name Josie continues to climb.

This makes Posey an on-trend possibility. The -osey spelling seems slightly more common, though the -osy one appears in many a pop culture reference.

If you love sweet, simple names for girls, Posey belongs on your list. And if feels too short to be complete? Josephine might make a great formal name.

What do you think of Posey? Does this name stand on its own? Which spelling do you like best?