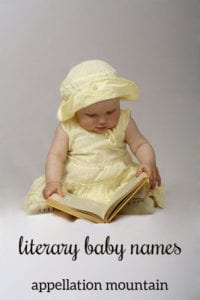 Literary baby names could refer to great character names. Authors, too, have inspired many a favorite choice. Just look at the current US Top 100, packed with names like Emma and Harper.

But there’s yet another choice when it comes to literary baby names – the literally literary ones. They’re terms that refer to something in literature, words that describe a genre, or a type of literature, or a device used in story-telling.

Some of these make great given names. Others feel best left to the middle spot.

But if you’re a book-lover with a creative streak, and a daring baby-namer, too, then these literally literary baby names could be exactly what you’re after.

Current US popularity: unranked; 112 boys received the name in 2020

Canon might bring to mind gore and war. Or maybe it refers to a canon, all of the most important works collected. (The Western canon is an oft-used phrase, but it’s far from the only one. How ’bout the Zora Canon, the 100 best works by African American women?) Or perhaps “canon” is a synonym for “accepted and official,” as in science fiction and comic books. In genres where lots of authors contribute over many years, you might hear that a certain series of, say, Star Wars novels are – or are not – considered canon.

As literary baby names go, Canon straddles the line between obviously inspired by all things bibliophile and something very different. But that’s the kind of ambiguity that might make this name the perfect pick for some families.

Just a tiny handful of people named Canto appear in various US records, and it is sometimes heard as a surname, too.

It makes this list because it’s an Italian word for song, and also the division of an epic poem – roughly equivalent to a chapter in a book. With so many o-ending names rising through the ranks, Canto could make a daring, but wearable choice.

Current US popularity: unranked; 18 girls and 5 boys received the name in 2020

It rhymes with vintage Mabel, and brings to mind girls’ names like Faith and Faye. But it wasn’t a name until 2008, when blogger Rebecca Woolf at  Girls Gone Child put this one on the list of possibilities. And why not? Story remains on the edges of possible noun-names, the one that kick-started this list. While Story feels solidly unisex, Fable’s Faye-Mabel sound pushes it to the girls’ side.

Current US popularity: #127 for boys

It’s a big name for a little baby! But it’s also an increasingly familiar choice, and just like we don’t assume every Grace is a ballerina, the more we hear Legend, the less we attach meaning and assumptions to the name. And make no mistake, Legend is trending. Unheard of in the early 90s, a video game and movie might have sparked the name’s uptick. But the real rise in use is probably down to singer John Legend, born John Roger Stephens.

Lyric comes from the Greek for lyre – as in the musical instrument – as we tend to associate it with, well, the words to songs. But it started out as a type of poetry. Like many a word name, it’s seldom heard in regular speech, which probably makes it easier to imagine Lyric as a name. It rose in use following Jada Pinkett’s turn as Lyric in the 1994 movie Jason’s Lyric, but it’s been adopted for boys, too.

Current US popularity: unranked; given to five or fewer children in 2018

In the Middle Ages, Madrigal referred to a short poem. Today, it’s more likely to refer to a type of music. So maybe it really belongs on this list of musical terms. But it could fit with literary baby names, too, the kind of rare word choice that parents are so often seeking. Bonus? It shortens to Maddie or Maggie, blending in with dozens of favorites today, while remaining a romantic, flowing, show-stopper.

Current US popularity: unranked; given to 46 girls in 2020

Stella, Ella, Bella … Novella fits right in. Add in the rise of Nova, and it’s easy to imagine Novella becoming a go-to among literally literary baby names. In literary terms, a novella is a shorter version of a novel, an original work of fiction. Both come from the Latin novus – new. And yet, Novella qualifies as a vintage revival. It appears in fourteenth century Italy – as did Novello – and ranked in the US Top 1000 into the 1940s.

If Fable is an option, why not Poem? In our age of P names, from Penelope to Promise to Poppy, it fits in quite well. And it’s not miles away from Liam, either. Like many literally literary baby names, interest in Poem is rising – but that hasn’t translated to use … yet. A bonus? Built-in nickname Poe, and blend-in nickname Emmie.

We name our children Hunter, Carter, and Piper, but Poet? Despite it being a job at least as common as any occupational name in the current Top 100, it’s barely on our radar. Actor Soleil Moon Frye has a daughter named Poet Sienna Rose, which is just all kinds of gorgeous. And Poet brings to mind other -et ending girl names, from Scarlett to Juliet. So it has potential as a first, or maybe as a bold middle.

Current US popularity: unranked; given to 11 girls in 2020

We love a good three-syllable, ends-with-y name for a daughter, from vintage Dorothy to 70s darling Kimberly to modern Everly. Word names, like Felicity and Harmony, abound, too. All of that suggests that Poetry could wear beautifully as an unexpected word name, first or middle. It’s close to Poet and Poem, too.

Current US popularity: unranked; given to 77 boys in 2020

Journey doesn’t appear on this list, but Quest qualifies. It spiked following the 2016 death of Phife Dawg, hip hop innovator and member of A Tribe Called Quest. The rise of purpose names, those meaningful choices that aren’t exactly spiritual but feel meaning-rich, is also helping Quest quietly catch on.

A quintain is any poem with five lines, including limericks. As a given name, Quintain feels like an elaboration of Quinn, an alternative to Quinton and Quinlan. The downside? It’s an obscure reference, not obviously literary to anyone but maybe an English major. But that’s an upside, too, making this easier to wear than a word name heard in everyday speech.

Like Quest, Rhyme doesn’t seem very name-like at first. But it fits with lots of bold, single-syllable picks, as wearable as Free, Lux, or Glow. Reign is far more common, but Rhyme fits better with literary baby names. It’s a little bit academic, but also maybe part hip hop and heavily children’s story. Now that is a quirky mix of influences!

Current US popularity: unranked; given to 7 girls in 2020

Sonnet is one of those wildly rare baby names that provokes an almost universally positive response. Maybe it’s because it feels a little bit like Summer and Janet and lots of familiar choices. Or maybe it’s just a name on the verge of becoming the next big thing, a logical successor to so many word names. Actor Forest Whitaker gave the name to a daughter way back in 1996.

Story had a moment about earlier in the 2000s, with a handful of high profile birth announcements, as both a middle and a first. And why not? It’s a great word name, meaning-rich but easy to wear. It rhymes with familiar choices, from Cory to Tori. Plus it’s one of the most clearly unisex word names – even though it’s more popular for girls at the moment.

What do you think of literally literary baby names? 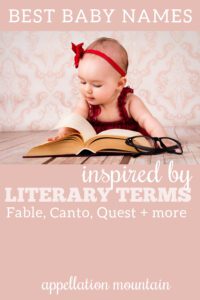 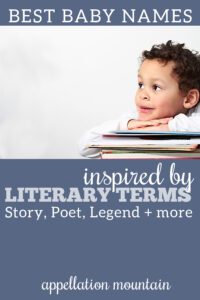