Thanks to Melanie and Kelly for suggesting Nova as our Baby Name of the Day.

And yet, Nova isn’t novel.  This name was used back in the 1800s, lending it a vintage vibe, too.

British actress Nova Pilbeam was born in 1919, and is best known for her roles in Alfred Hitchcock’s The Man Who Knew Too Much and Young and Innocent.

Wind back the clock to the 1500s, and astronomer Tycho Brahe used the phrase de stella nova to describe a new star – actually, a supernova he observed in the constellation Cassiopeia.

Astronomically speaking, a nova is a specific type of explosion on white dwarf, a specific type of star.  The term might have been obscure, except that WGBH Boston has long produced a science television show called Nova for PBS affiliates in the US.  It’s a long-running, well-respected series, and even if you’ve never seen an episode, chances are that you recognize the name.

There are some suggestions that Nova has Native American roots.  That seems to be an oft-repeated error, but the star-gazing meaning is completely legit.

Thanks to Brahe, Nova is as much a night sky name as Luna or Stella.  And given the popularity of night sky names these days, that could make her a very stylish possibility. 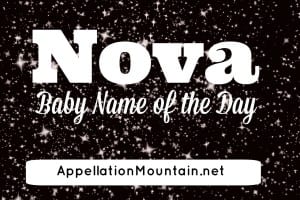 Nova: Name of the Moment

It’s not just her celestial associations that make Nova a name of the moment:

There’s also the Chevy Nova, a car manufactured through the 1980s.  And travel to Canada, and you can visit Nova Scotia – New Scotland.

The name has been given to a handful of girls every year, and some boys, too.

Back in 1920, 111 girls received the name, and 104 in 1929.  I’m not sure what explains those peaks – though there was a nova observed in the constellation Lyra in 1919.  American poet Robinson Jeffers wrote a poem about the celestial phenomenon during the same era.

In 1963, Eydie Gorme scored a Top Ten single with “Blame It on the Bossa Nova,” and 72 girls were given the name.

By 1992, just eleven newborns answered to the celestial appellation.  But it’s clear that Nova is once again on the upswing:

Something tells me this name has much farther to climb.  Nova is as simple and straightforward as Nora, less conventional than Eva, bolder than Genevieve.  With that great sound and ties to the night sky, Nova could explode!