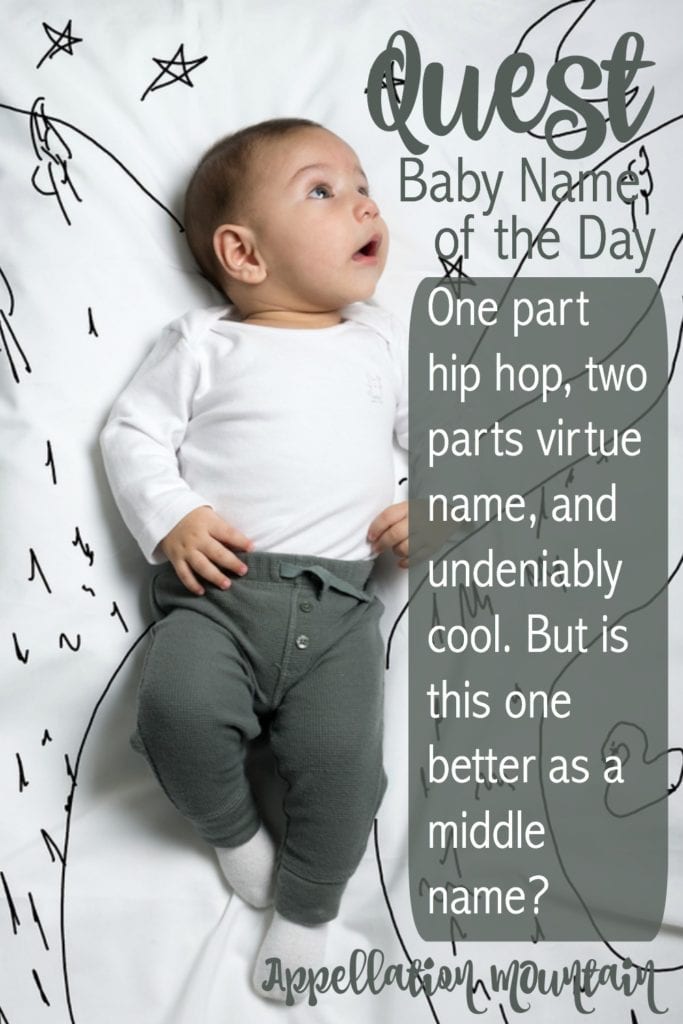 Quest came up in our discussion of bold middle name possibilities.

It seemed like it deserved more attention, so it is our Baby Name of the Day.

In Old French, quester mean “to hunt.” It was a much more literal search for game. It also came to mean pursuit, chase, or search.

In English, the word has a very different connotation. We seek knowledge, we look for meaning. It’s a deeper kind of hunt than the word originally conveyed.

Perhaps that’s consistent with the original Latin questa – which could also mean inquiry. The Latin is also the source of our words question and query.

Medieval romances may have been the first to use the word in a broader sense in English. Think of the Quest for the Holy Grail.

Other adventures are described using the same word: Jason’s voyage to find the Golden Fleece; Rama’s pursuit of the demon king Ravana to reclaim his wife, Sita.

Of course, in some cases we’re applying the word long after the story originated. The British Library’s exhibit “The Mythical Quest” uses the term to describe any story that “reflect(s) the fascination over four thousand years with the search for true love, everlasting glory and spiritual enlightenment.”

In many ways, that makes this a literary word name along the lines of Story or Legend. It fits right in with other rarities, like Sonnet, Fable, and Poem, Poet, and Poetry.

In the 1960s, we met the whip smart 11 year old Jonathan “Jonny” Quest, who accompanied his scientist father on adventures all over the globe.

The original series only ran from 1964 to 1965, but has been revived in multiple formats since.

1985 coming of age movie Vision Quest introduced the term to a broader audience.

In some Native American cultures, the phrase refers to a coming of age ritual, often including fasting, prayer, and dreams – or visions. The term isn’t necessarily used by Native American tribes, and it’s become more of a generic way to refer to rites of passage and self-discovery.

On the one hand, that ties this name up with all of the problems of Native American names. And yet, this may be less of a borrowing of a Native American concept, and more an example of how we understand the word quest in American English.

White left the group early, but the remaining three went on to become known for their smart, innovative lyrics and style. It’s sometimes called alternative hip hop. The group received many an award and accolade for their work.

A 2011 biopic about the group brought more attention to their enduring influence. The early 2016 death of Phife Dawg put the spotlight on the Tribe once more.

Quest: But is it a name?

Some credit clearly goes to the Tribe, but what about the rest?

It’s also an interesting sound – short, but with all the cool of the unexpected letter Q.

But does Quest work best as a cool, edgy middle name? Or is ready for the first spot?

Would you consider Quest as a first name for a child?