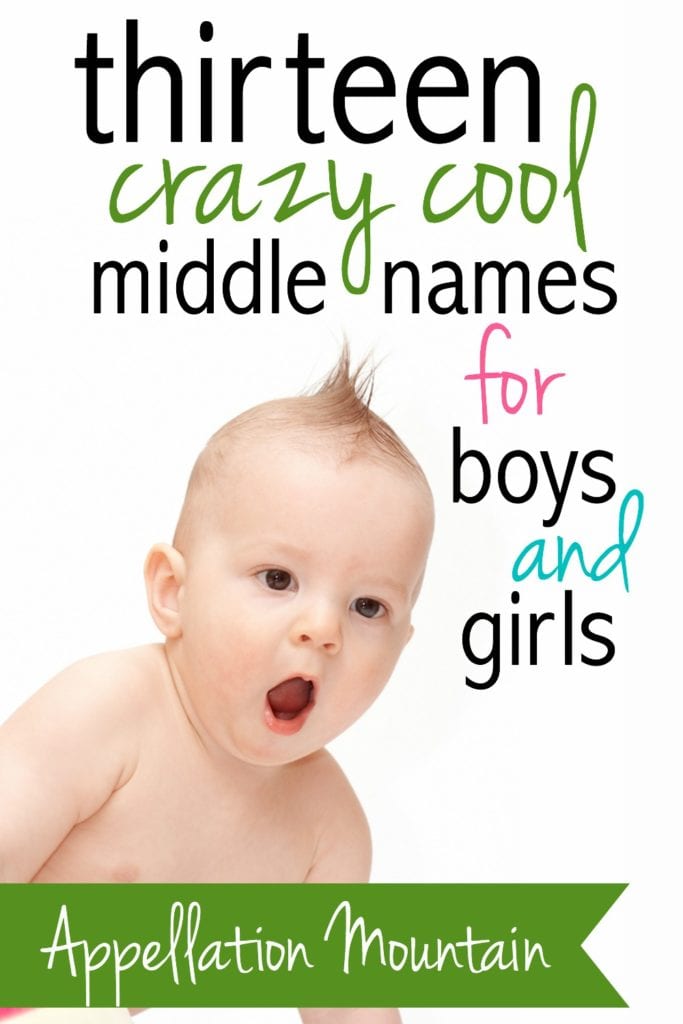 You’re not alone. While there’s no hard data on middle name choices, lately it feels like parents are opting for bigger, bolder, cooler middler names than ever before. There are good reasons – great reasons, really! – to embrace this trend.

If Blue is the new Beth and Wilde is the new William, what’s next? Here are a baker’s dozen of cool middle names. I think these thirteen names are a little bit too much as firsts, at least for most families. But in the middle? They’re exactly the right kind of surprise.

Read on for my thirteen favorite cool middle names of the moment:

Arrow – Maybe there’s something slightly aggressive about Arrow. But it’s almost a virtue name, too, isn’t it? We aim high, and our arrow flies straight. It makes this name more about goals and achievement than medieval warfare. Besides, Archer and Fletcher – both names related to archery – have gone mainstream, to say nothing of names like Remington and Colt. Sound-wise, it’s close to rising favorites like Arlo for boys and Willow for girls.

Bravery – Brave is a great option, too, and could easily make a longer list of cool middle names. But Bravery is truly daring. Actors Benjamin Bratt and Talisa Soto put this one on the radar when they named their son Mateo Bravery in 2005. Like Arrow, it’s a virtue name of sorts, but it’s far more ferocious than Grace.

Brio – Parents are really into Br names at the moment. There’s Brody, Bryce, and Brooks for boys, and Brooklyn, Brynn, and Briella for girls. Brio is an unexpected Br name that works for both. It comes from the Italian word for life, and in music, to play con brio is to play in a lively fashion, with vigor. As a first name, I’d say it leans boy. But in the middle spot, it’s a musical baby name with spirit for a son or a daughter.

Evening – We name our children for the months and the seasons, and sometimes for the days of the week. Names inspired by night are huge for girls at the moment – think Stella and Luna. But Evening is an interesting possibility for a son or a daughter, especially one born at night. The ‘Ev’ brings to mind popular names from Evelyn to Everett, and the -ing ending is about as different and distinctive as they come.

Frost – Winter is a fast-rising seasonal baby name, and we’ve heard Snow climbing in use, too. But for cool middle names, my heart belongs to Frost. It’s a little bit Queen Elsa, which makes it lean girl, but Jack Frost is all boy. Frost is one of the more appealing parts of winter, at least if you’re looking at it from inside your windows. It’s also a strong, unexpected sound.

Harvest – Autumn is a big name for girls these days, but I think Harvest is the more creative possibility. It brings to mind virtue name Haven, and suggests abundance and plenty. The name Theresa comes from the Greek word “to harvest,” but this is a far more modern possibility. A gorgeous pick for a baby born in October or November, don’t you think?

Hyperion – Hyperion is the last-minute addition that took this list up to thirteen! It’s the name of a Greek god, but is seldom used for children. It literally means “the high one” or “one who looks down.” The name has been used for a luxury automobile, a British racing horse, and a handful of comic book characters. But the reason I added Hyperion to this list is this tree, a California redwood generally believed to the be the tallest tree on earth. There are literary and pop culture uses for the name, too, including the setting of naming great Joss Whedon’s series Angel, and an incomplete poem by Keats.

Kindred – The brilliant middle chosen by Rowan of Eponymia for her new daughter inspired this post. Kindred can either refer to one’s family, or to any two related things – think “kindred spirits.” It’s an appealing meaning for a child’s middle. Rowan pointed out that it’s also the middle name of Philip K. Dick – it was his mother’s maiden name. As a surname, it might be derived from a Welsh personal name rather than the vocabulary word – but it’s the meaning that puts this one on the list of cool middle names.

March – It’s a verb and a noun, the surname of the March sisters of literary fame, and a tie to insanity, thanks to the phrase mad as a March hare. (That last one refers to rabbits during breeding season, which happens around March in Europe, but now also brings to mind Lewis Carroll’s guest at the Wonderland Tea Party.) April, May, and June are reserved for girls, but March feels like a bold choice for a son or a daughter.

Pax – In some ways, this is the opposite of cool baby names like Arrow and Bravery. Pax is the Latin word for peace. The Jolie-Pitts gave the name to a son, but the original Pax was a goddess, so it works equally well for girls. Eleanor Rose or Eleanor Pax? The latter is far cooler and much less expected.

Quest – Q might be the quirkiest and coolest of the middle initials. It brings to mind James Bond’s cast of Qs, where it is short for quartermaster, so a title rather than a name. Quinn is the obvious, most mainstream of the Q names, and Quincy and Quentin work, too. But for something truly aspirational, how about Quest? I mentioned this one in last month’s noteworthy names summary after the death of legendary rapper Phife Dawg of A Tribe Called Quest. The idea of a quest is bold and romantic, but it’s not such an every day word that it feels awkward as a name. Adventure might be a little harder to wear.

Seven – It was a punchline of a baby name on Seinfeld, then it became the middle name choice for the Beckham’s youngest, Harper Seven. Dad David explained that they chose the name for several reasons, including his many years wearing #7 for Manchester United. But he explained that it’s a lucky number in many cultures, with spiritual meaning, too. David also mentioned the Seven Wonders of the World and the colors of the rainbow. The spiritual meaning – referring to the day God rested – is a reason I’ve seen other parents cite for considering the name, but I think the idea of lucky seven might appeal to parents just as much. And, of course, there’s that letter v again!

Vrai – Speaking of V, this list would not be complete without a middle name starting with V. Vrai is the French word for true. True and Truth make edgy, interesting and cool middles names, too, but the French version goes even farther. I rhyme Vrai with fray. That’s not quite right if you’re speaking French, but I think it’s the logical franglais pronunciation.

What are your favorite cool middle names, preferably unisex ones? Would you consider any of the names on this list?