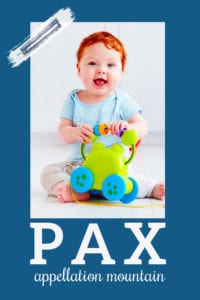 The baby name Pax may be short on sound, but it’s rich with style and meaning.

The baby name Pax is one of those Latin words that many of us translate without thinking about it – peace.

It’s the kind of virtue name that feels unambiguously good. Universal, even.

Speaking of universal, you might think of the phrase Pax Romana.

It refers to the long period in the first and second centuries, free of warfare, after Rome had conquered the world as they knew it.

The Emperor Augustus was the ruler responsible for the peace, as well as the propaganda machine that convinced the Roman people to embrace the unfamiliar condition.

Around this time, peace was personified as the goddess Pax.

The Greeks had a goddess of peace, too – Irene.

But while Irene has remained feminine, Pax is the rare name with clearly feminine roots that transitioned to almost exclusively masculine.

The Spanish Paz, on the other hand, became a feminine possibility. Like Luz, it nods to a title for the Virgin Mary: Nuestra Señora de la Paz, or Our Lady of Peace. While it’s rare in the US, a handful of figures make it familiar. Spanish-born Paz Vega is one notable.

There are two other places Pax surfaces:

Angelina Jolie and Brad Pitt put the baby name Pax on parents’ radar when they welcomed son Pax Thien Jolie-Pitt. He’s the second eldest of their family, adopted in 2007.

It picks up on casual classic name Max, which was quite stylish by 2007. But it also nods to Paxton. Paxton actually debuted in the US Top 1000 back in 1997. It seems like the celebrity baby name choice may have boosted Paxton’s appeal. Or not – it was rising rapidly when the famous couple made their announcement.

The baby name Pax combines two styles in one. It shares the short, high energy punch of modern picks like Jax and Cole. Pax sounds at home on a BMX bike.

And that x ending is a standard for boy names circa 2020. The Jolie-Pitt boys all have X ending names: Maddox, Pax, Knox. But so do plenty of not-famous children. Think of classrooms full of boys answering to Alex and Felix, Max and Dax, Lennon and Hendrix.

But it’s also so clearly a virtue name that there’s something contemplative and quite about it, too. Pax is a brother for Kai or Jude.

Both rare and familiar, meaningful and subtle, the baby name Pax is likely to please parents for lots of different reasons.

What do you think of the baby name Pax?

First published on September 12, 2011, this post was revised substantially and re-published on December 9, 2020.