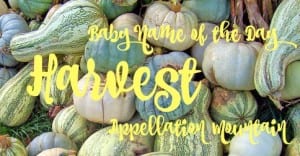 A sincere thanks to Corinne for suggesting our seasonally appropriate Baby Name of the Day: Harvest.

In Old English, this was simply the name of the season we now call Autumn or Fall. Which makes sense, because it’s the season in which the harvest traditionally takes place.

It wasn’t until around the fourteenth century that the word referred specifically to the act of gathering crops, as well as the crops themselves. Festivals are traditionally associated with the autumnal equinox – also known as the Harvest Moon.

By the late sixteenth century, a Harvest Home festival was celebrated in England, and it informed the Pilgrims’ first celebration of Thanksgiving in 1621 at Plymouth Rock.

Similar festivals are found elsewhere, including Russian and Poland, and beyond Europe, too. In China and Vietnam, there’s a Mid-Autumn Festival.

Modern pagans celebrate the festival of Mabon at the autumnal equinox, and it is also a harvest festival.

Thanksgiving as we know it is something of a modern invention. It was formalized by President Abraham Lincoln during the Civil War. But proclamation of national days of thanksgiving has a longer history, including one proclaimed by George Washington, and others, predating the United States. They weren’t necessarily tied to the growing season or the fall at all.

But over the years, we’ve bundled them all together, equating turkey, pumpkin pie, and those cranberries in a can, with the bounty of agriculture and the act of giving thanks.

Harvest: Beyond the Season 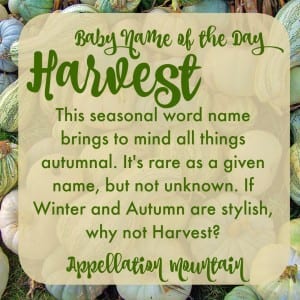 Some other uses of the word might come to mind:

Harvest: But is it a Name?

So harvest is a noun and a verb, and a poetic way to refer to all things autumnal, but is anyone actually named Harvest?

Nine girls and five boys were given the name in 2014. Since 1914, it has seen sparing use for both. It was slightly more common for boys in the earlier part of the twentieth century, and has been favored for girls from the 1970s through today. But the numbers are more or less equal over time.

There are reasons to think it would wear reasonably well today:

If you’re looking for a daring middle name for an autumn baby – boy or girl – this is definitely one to consider. And if bold noun names are your style, Harvest could even be an intriguing possibility as a given name.

What do you think of Harvest as a given name? Too word-like to wear? Or an interesting possibility? If so, better for a boy or a girl?