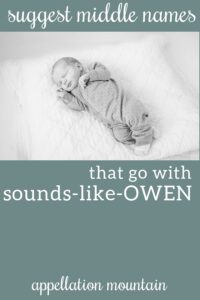 We need some help finding the right middle names for our new son.

His first name sounds like Owen, but is much less common.

We initially chose the middle names River Fox. My husband loves fishing, so River felt like it was “meant to be.”

I’m happy with his first name and with Fox, but River just doesn’t feel right.

Our other Son is sounds-like-Hudson (but much less common) Ezra Wolf.

We love unusual names but try to ground them with an older, recognizable name in the middle.

I absolutely adore Bodhi and would use it in a heartbeat. But Bodhi clashes with sounds-like-Owen due to the strong O sound in both.

Other names I like but my husband isn’t sure include Arthur, Dexter, Digby, Ephraim, Hugo, Huxley, Moses, Orson, and Orwell.

Any help is appreciated!

It sounds like the issue is this: you had a winning formula for your firstborn’s name. Unusual first, more serious middle, truly daring bonus middle. The pattern makes sense.

But your second son has two daring middles, without the benefit of more traditional name to anchor it all.

We could argue that River has caught on in a big way, and will almost certainly feel traditional in another generation or three. But we’re talking about today, and River still seems novel.

Does that sound right?

While changing a name is never easy, this seems like a fairly straightforward puzzle.

We’re looking for the equivalent of Ezra, which means:

It does strike me that your husband is probably giving something up, so I wonder if the best approach is to find two or three names that you love equally, but give him a little more say in the final decision?

From your current list, I think Arthur, Dexter, Ephraim, Hugo, Moses, and Orson might be the better bets. Digby and Orwell are great – but a little less broadly familiar.

I’m divided on Huxley. It’s certainly an established surname, but it’s trending now. Will it feel sufficiently traditional to fill that spot? Does the repeating ‘x’ in Huxley and Fox appeal … or repeat too many sounds? My inclination is to drop it from the list, not because it isn’t great … but because it shares some of the shortcomings of both River (a too-new name) and Bodhi (repeating sounds).

My personal favorite is Arthur. Like Ezra, it’s an old-school name that feels fresh and stylish by 2022 standards. And it’s a nice bring between sounds-like-Owen and Fox.

But … are the initials OAF a dealbreaker? I can’t decide.

My second favorite is sounds-like-Owen Hugo Fox. Another classic with a current vibe, perfect for anchoring an unexpected first and bold bonus middle. And while the O sound repeats, it’s far more subtle – and pleasing – in this combination.

Bodhi is such a great name!

But … the repeating sound is strong. Too strong, I think. It’s a little sing-songy when said together.

Beyond that consideration, I also wonder if Bodhi feels less like Ezra. While there’s plenty of history and meaning behind it, Bodhi has only emerged as a given name in very recent years. That puts it closer to River and Huxley than, say, Arthur or Hugo.

EZEKIEL – Like Ezra, Ezekiel combines a cool sound with Biblical roots. And I think the extra syllables help balance out a two-syllable first name and short middle name Fox.

HENRY – Too traditional? It has the ‘ee’ ending of Bodhi, but seems more like a rock solid anchor of a name.

ISAAC – Another Biblical possibility, but perhaps even more on the classic side.

MILO – Maybe not quite as conventional as Arthur, but Milo is a mainstream favorite with plenty of history.

THATCHER – If Dexter isn’t quite right, would Thatcher appeal?

ZACHARY – Or even Zachariah, for a more dramatic choice? Zachary feels like a staple name for a son, big in the 90s and still plenty familiar today.

From my list, I’m still stuck on Ezekiel. Sounds-like-Owen Ezekiel Fox. It’s more of a conventional given name than River, and a perfect parallel to Ezra. Plus the syllable count makes the overall rhythm of the name appealing, too.

Readers, over to you! What middle names would you suggest for sounds-like-Owen ____ Fox?