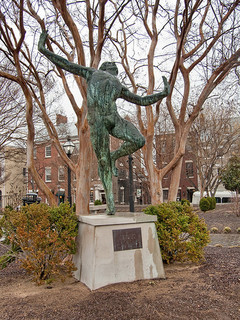 Visit Old Town Alexandria, and you’ll find a statue with this name in a courtyard.  But how would it wear on a real boy – or girl?

Thanks to Shannon for suggesting Brio as our Baby Name of the Day.

Brio is a noun, and an upbeat one.  The closest synonym is probably vitality.  That’s a great meaning, the kind of spirit that many of us would like for a child’s name.  It’s more daring than Felix or Asher, but not nearly as out there as Happy.

It’s even more interesting to look at the word’s origins.  In Italian, brio translates to life.  The musical term con brio means to play with vigor – or sometimes, more poetically, with fire.

There’s more than one possible origin for the word, but here’s my favorite – the Old Provençal briu – wild, possibly from a Gaulish word meaning strength.  There’s something rather romantic about a word borrowed from the language of Southern France.  Occitan was the language of twelfth century troubadours and one of the first traditions of vernacular literature in Europe.

Another possible origin?  The Latin ebrius – also the source of our word inebriated.  Best to go with the Gauls.

Brio has been much-used in the twentieth century and beyond, though not as a given name.  Instead:

Brio has never been given to more than 5 girls or boys born in the US in any year.  But is it such a stretch?

All of this makes Brio a possibility for parents interested in a daring word name with a great meaning and an on-trend sound.  It might serve as a creative means to honor a Brian, or a more daring alternative to Bree.

It’s a good choice for a name that is truly different and distinctive, but still sounds and feels like a name.