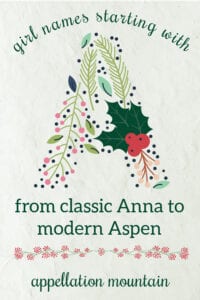 Looking for girl names starting with A?

It’s the single most popular first initial for our daughters in recent years. It leaves runners-up E, M, and S in the dust.

In some ways, that’s nothing new. Anna, Anne, Annie, and Ann alternated their tours in the Top 100, and many appeared in the Top Ten. Classic choices like Abigail and Alice enjoyed plenty of time in the sun, too. But today, it’s not just the traditional picks. In fact, the Anns are at something of a low-point, while former staples like Agatha and Antonia fail to make the current Top 1000 at all.

Still, A names for girls span every style. From stylish mini names to vintage revivals, intriguing imports to elaborate romantics, there’s no shortage of possibilities beginning with A.

Read on for more girl names starting with A, from the current chart-toppers to names you might not have considered.

MOST POPULAR GIRL NAMES STARTING WITH A

These are the most popular girl names starting with A, based on births in the calendar year 2020. (Check the full list for yourself here, at the Social Security Administration’s name site.) A staggering 163 girl names beginning with A rank in the current Top 1000.

Short on letters, big on style. Ava carries all the glamour of Hollywood’s Ava Gardner, but still feels spare and minimalist. Bonus? It’s a palindrome: spelled the same forwards and backwards.

Sweetly vintage, Amelia was popular in the late nineteenth century. But it’s even more popular today. Perhaps it’s the combination of antique style with the image of high-flying, world-changing aviator Amelia Earhart.

A long-time Top 25 name for girls in the US, nearly every Abigail is actually an Abby. It comes with a great meaning, too: my father is joy.

Surname Avery was nearly unknown until the late 1980s. That’s when we met Avery Brown, mother to fictional journalist Murphy Brown. After Murphy named her son after her mother, Avery rose for boys and girls alike, but today it’s far more popular for girls.

Musical Aria hits all the right notes. It’s a lovely liquid name reflecting the sound of our times. It fits with so many word names, from Willow to Grace. And the one-two punch of Pretty Little Liars and Game of Thrones introduced it to lots of parents.

The Roman goddess of the dawn, Aurora has a long history of sparing use. But it’s never been more popular than it is today.

A logical successor to Allison and Madison, Addison soared into the Top 100 back in 2006. Add in alternate spellings like Addisyn and Addyson and it’s even more popular than the current rankings suggest.

A 1972 song by Bread transformed Aubrey from sometimes-heard male name to fast-rising favorite for girls. It entered the Top 100 in 2006, long after the song faded from playlists.

With all the charm of Hollywood icon Audrey Hepburn, this name feels like a modern traditional choice for a daughter.

Aaliyah means sublime in Arabic, which makes this lovely, vowel-intensive name even more appealing. The late singer Aaliyah put it on parents’ radar in the 1990s and it has been in the Top 100 since 2001.

A classic among classics, Anna is currently the reigning Ann- name. And yet, even as a Top 100 name, it feels surprisingly rare.

A classic favorite, equally at home in Wonderland or in the real world.

A slimmed-down version of the mythological Ariadne, powered to the top of the charts by singer Ariana Grande.

Seasonal and tailored, Autumn has become a modern staple.

The most popular of many spellings of this vintage name.

Alternate spelling of Aria, fueled by Game of Thrones.

Another Adeline spelling option, one that looks something like an Ada-Lynn smoosh.

A Basque name meaning joy, Alaia has shot up the charts in recent years. In 2009, just 44 girls were named Alaia. As of 2020? 2,254. That’s a meteoric rise seldom seen even before the many alternative spellings are considered.

VINTAGE A NAMES FOR GIRLS

As spare and simple as Ava, but with more of a homespun, vintage vibe.

Regal and relatively uncommon, at least compared to the many spellings of Adeline.

Multiple meanings and origins apply, but Alma is likely rising because of its Spanish roots, where it means soul.

Maybe you think of Amanda as stuck in the 1980s with Allison, listening to Duran Duran on cassette. But, but, but it’s been around since the seventeenth century – at least – and has history to spare.

Midway between Amelia and Emily, this French name owes a little to both.

A graceful, elaborate name with a powerful meaning: resurrection.

Angelina ranks slightly higher, but the Schuyler sisters put Angelica on this list – and on parents’ radar, too.

An Antonia elaboration that expands the name’s nickname potential dramatically.

A Norse name, Astrid has been boosted by everything from How to Train Your Dragon to Vikings.

A golden name by way of the ancient world and Italy.

MODERN A NAMES FOR GIRLS

Hadley – or maybe Bradley – with a letter or two dropped.

A Hawaiian inspired name, like so many rising favorites ending with -lani.

Every Top Ten name encourages a few similar choices, and #1 Olivia is no exception.

With multiple possible origins, Alora feels like a twenty-first century name, and an update to classic Laura.

A tree and a place name, Aspen is right at home with Willow and Rowan.

An elaboration of Ava, with a nod to Ariana and company.

Some probably first heard this name in 1980 novel Clan of the Cave Bear, but Ayla might be Hebrew or Turkish, too.

A Turkish name meaning moonlight, with a tailored, modern appeal.

RARE GIRL NAMES STARTING WITH A

What if you love A names for girls, but want something just a little different? These names might satisfy. None appear in the current US Top 1000.

For every chart-topping surname name like Avery or Addison, there’s an Adair. Originally a Scottish form of Edgar, that connection isn’t well-known – or particularly obvious. And if you’re after something bold for your daughter’s name, the “dare” sound makes this one doubly appealing.

The name of a Scottish river immortalized in a Robert Burns poem, Afton has flowed into greater use as a girls’ given name over the years. A little bit literary, with ties to the natural world, few names hit the same sweet spot as Afton. As a bonus, Burns’ poem has been set to music, most recently by Nickel Creek.

Heard in New Orleans, Amenaide looks like an Amelia-Adelaide mash-up with an extra syllable added. Flawlessly French and ever so rare.

Fellow virtue name Felicity ranks comfortably in the US Top 500 – but it had a saint and a television series to boost familiarity along the way. The far rarer Amity offers a great meaning – friendship – and an equally appealing sound.

If you know your Latin – or Spanish or French – you can unpack Amoret. It comes from amor love. Poet Edmund Spenser invented it for his 1590 epic poem The Faerie Queene. It’s seldom heard as a given name, but fits right in with Juliet and Scarlett.

An Arabic name meaning friendly, Anisa is rare in the US, but heard elsewhere in the world. It’s sometimes spelled with a double ‘s’ but that might confuse the pronunciation. Anisa rhymes with Lisa.

We love Annabelle and lots of other Ann- names, so how about Annemor? It’s an import from Sweden and Norway, only used since the middle of the twentieth century. The first syllable is the classic Ann; mor means mother.

Another word name possibility, arbor comes from the Latin word for tree. While it more commonly refers to a garden now, the annual observance of Arbor Day keeps the meaning top of mind. Arbor fits with similar-sounding Harper, as well as nature names like Willow and Rowan.

Okay, it could be mistaken for Atlanta, the city in Georgia, time after time. But the Atalanta of myth has a great story to tell. She refuses to marry unless she can find a husband who can outrun her. In other tales she sailed with the Argonauts and hunted a wild boar.

A mystical island paradise in Arthurian legend, Avalon has been borrowed as a place name over the years. It’s also a famous Roxy Music album, and very occasionally, a given name.

What are your favorite girl names starting with A? 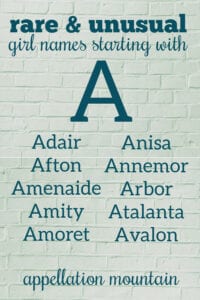 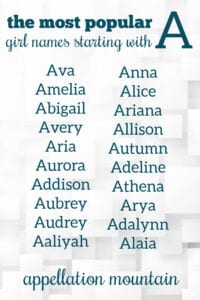