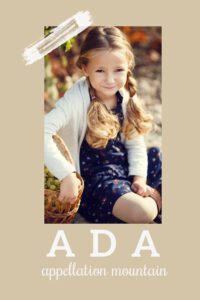 Spelled Adah in the Old Testament, it comes from a Hebrew word meaning adornment.

Along with Adelaide and a host of related names, it might come from the Germanic adal – noble.

And one more: in Tagalog, Ada means fairy.

The name comes with considerable history, too.

Back in the fourth century BC, Ada of Caria ruled her kingdom as a satrap after the death of her brother-husband, and allied herself with Alexander the Great.

But the most famous Ada is probably the daughter of the poet Lord Byron.

Christened Augusta Ada, in honor of an aunt, she was always known as Ada. She married William King-Noel, the Earl of Lovelace – making her a Countess. But we usually call her just plain Ada Lovelace.

Lovelace was a mathematician, and her work with Charles Babbage is considered the earliest model for a computer and software.

The US Defense Department named a computer language Ada in her honor.

All of this lends the baby name Ada some edge, making her less of a gentle vintage choice and more of an intellectual, creative one.

By the 1980s, the name left the US Top 1000 entirely, sitting just outside the rankings for years.

Some of that reflects our love of vowel-forward mini names. Mia and Leah and, of course, Ava, all paved the way for Ada’s return.

We love Addie names, too – pick your spelling of Adeline, and surname Addison is only recently fading.

But there’s more to the story.

The baby name Ada was already rising on its own merits when Peaky Blinders debuted.

The British crime drama focuses on the Shelby family – fictional, but based on real life people and events – from the 1890s into the 1920s. It debuted in 2013 and will conclude following season six in 2021.

Ada Shelby Thorne is the only sister in the family, and her story features across the seasons.

And, of course, the name could still climb higher.

From an ancient queen to a proto-computer programmer to a fictional character, Ada belongs to women of character and strength. It’s a simple, but solid, choice for a daughter’s name.

What do you think of the baby name Ada? 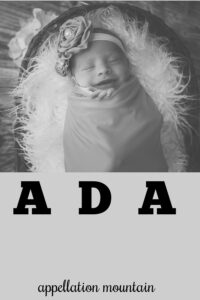