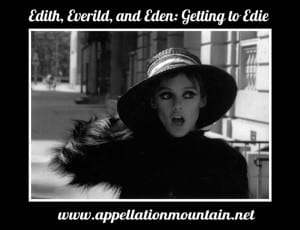 If Dex is my new favorite nickname for boys, I’m all about Edie for girls.

And why not?  She fits right in with Sadie, Hattie and all of those spunky, retro short forms.

Edie Bouvier Beale, the name shared by mother and daughter, aunt and cousin to Jacqueline Kennedy Onassis, take Edie in a different direction.  The pair of privileged women are known for living out their days in the family’s crumbling manse, Grey Gardens.  Their story has been the topic of books and movies.

There’s also Edie Brickell.  With the New Bohemians she recorded “What I Am,” a happy, jangly one-hit anthem.

Add it all up and Edie hits the right notes: offbeat but with grace, traditional but unexpected.  She’s on the rise in recent years, but still well outside of the Top 100.  Best of all, there are plenty of options for a formal name to put on her birth certificate.

The Obvious Choices: Getting to Edie

Edie – With choices like Sadie, Sophie, and Ellie given as independent names, there’s no reason Edie couldn’t stand on her own.  She feels modern, unexpected, and still substantial enough to be worn by a child or an adult.

Edith – Most famous Edies actually answered to this saintly, regal choice, one of the few Anglo-Saxon names to survive the Norman conquest.  It’s also the birth name of actress Edie Falco.  Edith has yet to make a comeback, but she’d fit right in with Olive, Pearl, and lots of other granny chic choices currently in revival.

Old School Obscurities: Getting to Edie

Eluned – Often Anglicized as Lynette, Eluned is a fifth-century Welsh saint’s name.  The strong lu sound suggests Lulu could be a logical nickname, but the letters are there to get to Edie, too.

Endellion – A sixth century Cornish saint’s name, Endellion was in the press a few years back when British Prime Minister David Cameron welcomed a daughter named Florence Rose Endellion.  (Baby Florence was born while the family was on holiday near the Cornish village named after the saint.)  Other forms of the name could appeal: Endelienta, Endelient, or the modern Cornish Endelyn.

Edana – Irish myth gives us Étaín, a goddess associated with horses and the sun.  I first heard her name Anglicized as Aideen, but that’s not quite accurate.  (Hear it said in Old Irish here.)  Poems described her as the fairest of them all.  Edana is said to the Latinized form of the name, worn by a sixth century Irish saint.  Another intriguing form of the name: Eidyn, though it may have been more place name than personal appellation.

Ermintrude – A reader reminded me of this one, a name from the Shopaholic series.  It’s an unlikely way to get to Edie – but then, it is something of an outlandish name to bestow in 2013.  I’d use Trudie as a nickname, but why not Edie?  There’s also Ermingilde, an fustier find.

Everild – Another saint, this time from the seventh century.  Everild leads more logically to Evie, but Edie could work, too.

Granny Chic: Getting to Edie

Nothing revives a grandmotherly appellation like a punchy short form.  Wouldn’t Edie add spark to some of these choices?

Edina – If you’ve ever seen Absolutely Fabulous, this one probably springs to mind.  She’s not Edie, though – Jennifer Saunders’ character answers to the boyish Eddy instead.  Still, Edina – sometimes seen as a feminine form of Edward – could lead to Edie.

Edna – She’s an ancient Hebrew name and a common Anglicized form of Eithne.  Edna is also about as far out as you can get, though she’s still in use.  Short form Edie could help revive this storied choice.

Edwina – There’s something slightly awkward about the wina ending of this feminine form of Edwin, but she’s got a steady history of use in the twentieth century.  If you’re determined to honor a great-aunt Edwina, at least there are plenty of nickname possibilities: Edie, Eddy, and Winnie.

Enid – A name from Arthurian legend, and familiar to readers of the Sweet Valley High series.  Despite this winning combination, Enid remains in style limbo.

Imports & Rarities: Getting to Edie

Edessa – An ancient place name and a twelfth-century Crusader state, Edessa hasn’t been used as a given name – but it sounds like it could.

Edvige – I’m intrigued by Edvige, an Italian form of Hedwig.  Hedwig feels like a non-starter in the English-speaking world today, and Hedy, despite her Hollywood cred, seems a little awkward in 2013.  But Edvige called Edie is deliciously unexpected.

Eilidh – I love the look of this name, considered a Scottish short form of Elinor.  It seems like it would lead logically to Edie, but there’s a catch.  The pronunciation is like Hailey without the H – no d sound to be heard.

Eurydice – In myth, she’s the ill-fated wife of Orpheus, and a popular subject for operas and artists.  Edie makes the elaborate appellation wearable.

Evadne – Another Greek name in the key of Penelope and Chloe, Evadne feels like the kind of name we should be hearing more.  Once again, the obvious short form is Evie, but her strong d sound makes Edie an option, too.

Surprises: Getting to Edie

The obvious way to get to Edie is from a name starting with Ed.  But the letters appear in plenty of other names, too.

Frederica – The feminine forms of Frederick can result in a girl called Freddie.  But if that feels too tomboyish for your tastes, Edie is an option.

Modern Options: Getting to Edie

Surnames and noun names and more …

Eden – A modern favorite, Eden needs no shortening.  But if you’re so inclined, Edie is an obvious choice.

Edison – Surnames like Ellison and Emerson have jumped to Team Pink because of their nickname potential.  Could Edison called Edie fit in this

Emerald – You’d probably call your little jewel Emmy for short, but Emerald’s ending d means that Edie could be another possibility.

How do you feel about Edie?  Does she stand on her own?  Which formal choices do you think work best?  Are there any that should be added to this list?