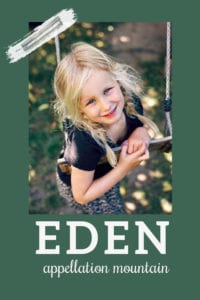 The baby name Eden started out as a place name, a paradise lost. Now it’s heard on nearly any playground.

Adam and Eve’s hometown has disputed origins. Most connect it to the Hebrew edhen – delight.

We understand Eden as center stage for the Book of Genesis, and a lush, green, fruitful land. It features in art and literature, from Michelangelo to Milton.

Of course, it’s also the place from which man was banished in disgrace.

That doesn’t diminish the ideal the name conveys. The meaning helps: it almost certainly means “delight,” consistent with the garden’s description in the Bible.

Well over a dozen places in the US alone are named for the garden. Factor in street names and such, and it’s broadly familiar, well beyond Christian families.

Some suggest the baby name Eden was embraced by the Puritans.

Maybe. It tracks with how they chose their children’s names. But the historical record has yet to demonstrate Eden in use a child’s given name so many centuries ago.

And yet the baby name Eden appears in records sparingly for two reasons.

First, it was sometimes heard as a nickname for Edith. An Old English name with history to spare, Edith naturally shortens to Edie, but -n endings for diminutives have been common in various traditions.

Other uses of the name give Eden to the boys. It darts into the US popularity data for boys in a small way as early as 1917.

Perhaps that’s because it’s sometimes a surname. In which case, it might share similar Old English roots with Edith. Or it could come from the river by the name in Cumbria, England – in which case, Eden is a simplified version of Ituna, from a Celtic word meaning water. Other origins are possible, too.

We can think of notable bearers. To name just one: Sir Anthony Eden served as British prime minister in the 1950s. And then there’s Barbara Eden, who starred in I Dream of Jeannie in the 1960s. But we’ll come back to her.

A June 1941 novel, Patrick White’s The Living and the Dead, gave the name to a daughter.

Never heard of White? He’s not exactly a household name today. But the Australian author would become the first from his country to win a Nobel Prize for Literature. Even though this was one of his early works, it appears to have been fairly well read in the US.

Because in 1943, five girls were given the name, marking the baby name Eden’s debut in the US Social Security data for our daughters.

So what transformed the baby name Eden from occasionally-heard rarity to modern powerhouse?

Let’s begin with actor Barbara Eden. Born Barbara Morehead, she adopted her stage name when she started singing and acting in the 1950s.

In 1965, she earned the role of Jeannie in I Dream of Jeannie. It’s exactly what it sounds like – she’s 2,000 years old, stuck in her bottle. And then Tony Nelson – an Air Force captain and astronaut – happens on her bottle. Wackiness ensues, but the couple ends up falling in love and marrying by the show’s 1970 conclusion.

The sitcom was a smash.

But there’s only a tiny rise in use of the baby name Eden during that time.

Wealthy, privileged Eden Campbell joined the cast in 1984. She fell in love with Cruz Castillo, a police officer from the wrong side of the tracks. The star-crossed lovers became a wildly popular soap opera super-couple.

We’ve long since forgot that a soap opera launched the baby name Eden.

It fits with so many trends. Eden feels as meaning-rich as Grace and as tailored as Piper or Evelyn. It sits midway between place names and nature ones, a successor to Brooklyn, a sister for Autumn.

While the baby name Eden is used in far greater number for girls, it’s growing as a boys’ name, too. As of 2019, the name ranked #469 for our sons. It’s nearly tripled in use for boys over the last decade.

On meaning, sound – think Ethan, Evan, and Aiden, and history, there’s no reason this name wouldn’t wear every bit as well for a boy.

Overall, the baby name Eden hits the sweet spot. It’s immediately familiar, but not too terribly common. And while it offers plenty of meaning and history, it leans modern, too. For a thoroughly twenty-first century name, Eden is among the best.

Would you consider the baby name Eden for a daughter – or a son? 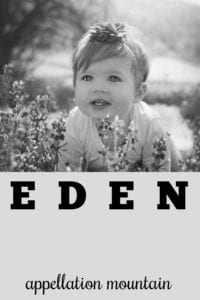