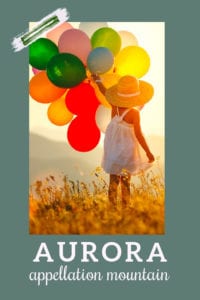 The baby name Aurora melds mythology and the natural world, with a healthy dose of Disney magic.

Thanks to Laura for suggesting our Baby Name of the Day.

Roman mythology gave us a goddess by the name. Aurora flew across the sky at daybreak, bringing the rising sun. Some accounts make her the mother of the four winds, and sister of the moon, Luna.

Homer and Virgil, Shakespeare and Tennyson all referenced Aurora.

There’s no shortage of paintings, either. After all, a goddess pulling a chariot seems perfect inspiration.

The goddess brought the sun, but we tend to associate Aurora with the night sky.

You’ve almost certainly seen pictures of them. Electrically charged particles from the sun enter the earth’s atmosphere, causing the lights. You’d have to head to rural places near the earth’s poles, like the Yukon or Siberia, or Antarctica in the South, for a good view.

But it’s a well-known phenomenon, making the baby Aurora equally tied to myth and nature.

The name appears across the ages.

Before the year 1900, women named Aurora can be found in Peru and Chile and throughout Scandinavia. Nineteenth century French novelist George Sand was born Amantine Lucile Aurore Dupin in the year 1804; she grew up answering to Aurore.

In the early twentieth century, the baby name Aurora caught on in the young Soviet Union. Why? According to tradition, the cruiser Aurora fired the very first shot in 1917, signalling the start of the Bolshevik Revolution. Tsar Nicholas II named the ship himself, for the Roman goddess. It survived the Russo-Japanese War in 1904-05, and was moored in St. Petersburg on the fateful day.

Turns out that the story may not be true. But Soviet propaganda featured the ship, and it later became a symbol of resistance during World War II.

Aurora – or Avrora – caught on.

Something else was happening in the late nineteenth century. And again, Russia gets credit.

Pyotr Tchaikovsky composed his ballet, The Sleeping Beauty, in 1889.

It’s based on Charles Perrault’s La Belle au bois dormant, written in 1697. Earlier versions of the tale were recorded as much as three centuries earlier.

The Brothers Grimm titled their version of the story “Little Briar Rose” in 1812. They also referred to the princess as Rosamund.

But Tchaikovsky took his inspiration from Perrault, who gave the Beauty no name – but named her daughter Aurore. Tchaikovsky chose Aurora for the princess herself.

When Disney adapted the fairytale as a feature length animated movie in 1959, they kept Aurora.

Given the wild popularity of the Disney princesses, that makes Aurora a household name – six decades later.

But up until recently, it’s been pretty rare.

It’s not clear what took the baby name Aurora from rarity on the edges to mainstream favorite.

In 1979, Aurora debuted in X-Men. While the character continues in the comics, she’s never graduated to the big screen. So that doesn’t seem like a reason for the name’s rise.

1975 novel turned 1983 celebrated film Terms of Endearment gave us Aurora Greenway, played by Shirley MacLaine in the movie. MacLaine won an Oscar for the role. But again, the timing doesn’t seem quite on.

Right around the year 2000, Disney introduced their princesses line, putting all of their tiara-wearing characters – from Cinderella and Snow White to Ariel and Jasmine – on the same products. Sleeping Beauty, of course, fit right in – but the baby name Aurora was already on the upswing.

Maybe it’s down to sound? In 1990, names like Ariana and Olivia were gaining in popularity. Isabella returned to the Top 1000. Vowel-forward names were about to take off. Feminine, romance-language baby name Aurora fit right in.

All the -ora enders – think Nora and Cora – would soon follow them up the charts, too.

And why not? It combines all the strength of myth and nature with a fairytale princess sensibility. Plus there’s sparky nickname Rory to use – or not. Travel nearly anywhere in Europe, and the name will be familiar, too.

It’s a name that gives parents everything they could want in a stylish, on-trend name with history galore.

Would you consider the baby name Aurora? 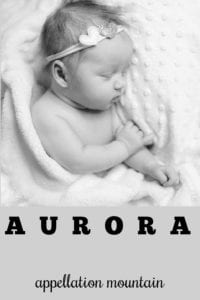