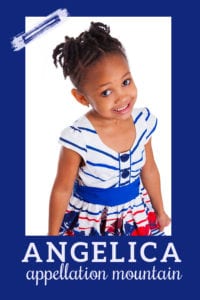 The baby name Angelica has been around for ages, but lately it’s in the spotlight thanks to a historical figure.

The baby name Angelica comes from the Greek angelos – messenger. Or, of course, angel. We picture them with harps and wings, but the theology surrounding the concept is rich and deep.

Still, angelic refers to the Christmas card version of angels: pure, sweet, ethereal. Angela is the far more traditional form of the name, but Angelica has history to spare.

The name claims literary roots. In Matteo Boiardo’s fifteenth century poem Orlando Innamorato, Angelica is a princess at the court of Charlemagne. Orlando falls in love with her.

Ludovico Ariosto penned a sequel, Orlando Furioso. The character filtered into general use in medieval French legend and lore.

They’re not happily-ever-after fairy tales. In fact, Angelica suffers mightily and the pair don’t end up together. (At least not in Ariosto’s telling.)

But it cements the name’s place in literary history.

By the 1600s, a family of herbs was also known as angelica. They were widely believed to help prevent or cure the plague. It’s often said the monk that identified and named the herb was inspired by an angel in a dream.

But lately, this name brings to mind a single historical figure: Angelica Schuyler.

She’s the eldest daughter of wealthy landowner Philip Schuyler. Hamilton tells us that she introduced Alexander to her sister, Eliza – despite being attracted to him herself. Is it true? It’s impossible to know, but “Satisfied” makes a compelling case.

Angelica also leads the three sisters when we first meet them, telling us that she’s going to persuade Thomas Jefferson to “include women in the sequel.” She’s calculating, but self-sacrificing, as intelligent and strategic as any of her male counterparts.

I hope at least part of her story is true.

Her surviving letters suggest that she was an extraordinary woman. Renee Elise Goldberry won a 2016 Tony Award for her performance in the role.

A second figure appears in the history books: Angelica Singleton, niece of Martin Van Buren. Van Buren was a widower when he was elected president. His niece served as official hostess.

It suggests that the name remained in steady use in the US across the centuries.

Until Hamilton came along, the most famous Angelica was a determined, ponytailed animated character on Nickelodeon’s smash hit series Rugrats. Angelica Pickles starts out as the bossy bad-guy older cousin to Tommy and Dil, but her character evolves over the show’s long run.

Then there’s Blackbeard’s daughter, Angelica, played by Penelope Cruz in the Pirates of the Caribbean franchise. So far, her only appearance has been in 2011’s On Stranger Tides, but her storyline suggests we might meet the character again.

Despite this long history of use, the baby name Angelica was seldom heard from the late 1800s into the mid-twentieth century. The name returned to the US Top 1000 in 1959 at #945.

There’s a minor character in JRR Tolkien’s Lord of the Rings, Angelica Baggins. Like many female Hobbits, her name is borrowed from the plant.

But it seems more likely that the baby name Angelica rode Angela’s coattails to the time. Angela entered the US Top 100 in 1956, and would crack the Top Ten by the middle of the 1960s.

Likewise, Angelica has fallen in use as Angela has declined.

But that’s before the smash musical became a movie, which debuted on Disney+ just in time for Independence Day 2020. Even though lots of us were listening to the soundtrack, up until this summer, tickets were crazy expensive, even for the touring version – and they were immediate sell-outs, often requiring season tickets and a lottery for seats.

No question that many, many more of us are sitting at home, listening to the Schuyler sisters work. And maybe, just maybe, considering the baby name Angelica.

What do you think of the baby name Angelica? Will the musical make it catch on?