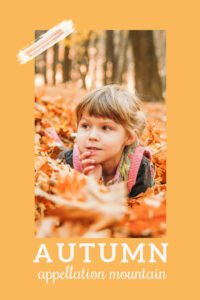 The baby name Autumn combines all the appeal of the season with a tailored, stylish sound.

As soon as the calendar turns to September – often well before sweater weather sets in – we’re drinking pumpkin spice lattes and walking past displays of fun-size Snickers bars at Target.

Autumn, completed with Back-to-School and Halloween, shorter days and falling leaves, can be kind of a big deal.

But up until the 1500s, it wasn’t autumn at all. Or even fall. Instead, it was called Harvest in English.

The Latin autumnus gave us the French automne, and eventually changed the season’s name in English, too. The meaning is uncertain, though it’s sometimes linked to the Latin auctus – increase.

Interestingly, lots of languages didn’t have a name for autumn at all until relatively recently. In Greek, it translates to “waning of summer.” The Old Irish word means “under-winter.”

But that seems like old news to us today.After all, we’ve used the term for centuries.

Vivaldi’s “Four Seasons” includes, of course, a section for the season, composed around 1720.

In the 1960s, the influential independent label Autumn Records released the original version of Jefferson Airplane’s “Somebody to Love,” along with plenty of other chart-toppers from the era.

If that seems like an obscure reference, well, it turns out that the 1960s was a good decade for all things Autumn.

A tiny handful of people received the baby name Autumn in the first half of the twentieth century. A few appear in US Census records even earlier than that, both male and female.

Then came the 1960s. Nature names started to catch on. Not just the baby name Autumn – and Summer – but choices like Laurel and Misty made the mainstream.

The baby name Autumn climbed faster than many, debuting in the US rankings in 1969.

That is a lot of girls answering to Autumn.

It helps that the letter A is so steadily popular for girls’ names in the US.

Au names – the symbol for gold, from the Latin aurum – include Audrey, Aubrey, Aurora, and Aurelia, to name just a few.

The baby name Autumn has been popular long enough that a handful of women have made it more familiar.

Canadian-born Autumn Phillips married Peter Phillips, eldest grandson of Queen Elizabeth II. Their daughter, Savannah, is the queen’s first great-grandchild. While the couple are now divorced and were never the best-known members of the royal family, it’s a high-profile use of a once surprising name.

There’s also actor and The OC alum Autumn Reeser, and a handful of up-and-coming actors and others.

It’s easy to imagine choosing the name for a daughter born in September, October, or November. Or maybe your wedding anniversary or another significant date falls during the fall.

Frills-free, familiar, and as lovely as a sunny, cool October afternoon, there’s plenty of reason to imagine that we’ll be naming our daughters Autumn for years to come.

What do you think of the baby name Autumn?

First published October 31, 2011, this post was revised substantially and re-published on October 6, 2021. 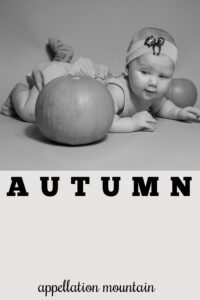