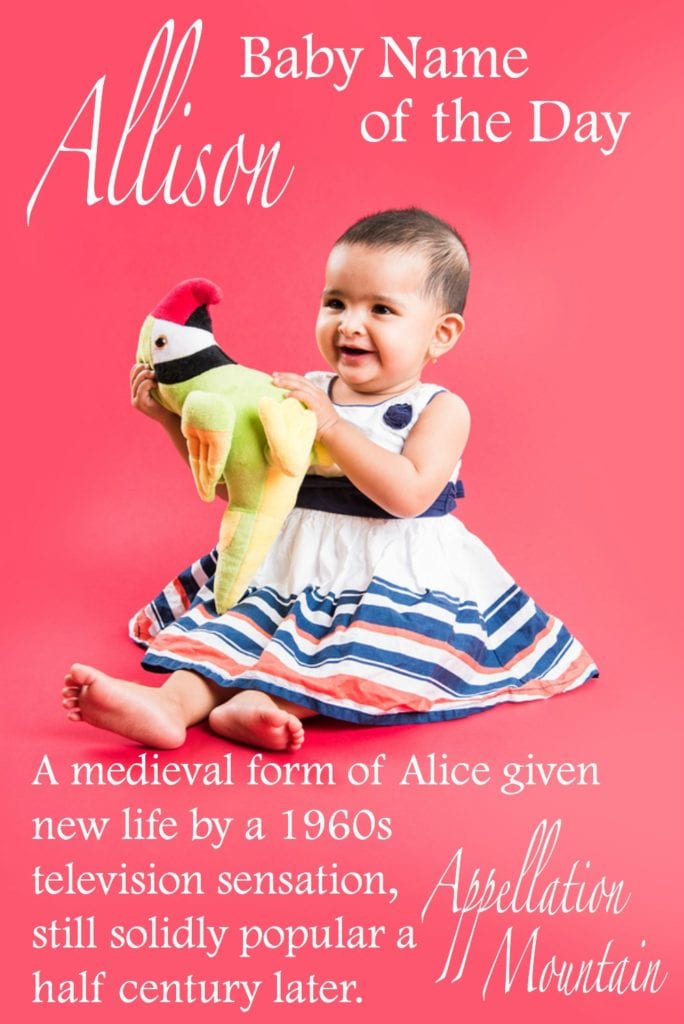 Allison changed the way we name our daughters.

Top 100 month continues with this intriguing Baby Name of the Day.

You’ve heard the criticism. Names ending with -son mean son of, and thus are meant for boys.

Allison reigns as the first ends-in-son name to strike it big for girls, long before we considered Madison, Emerson and Addison for our daughters.

Allison: One L or Two

The single-L spell found favor beginning in the 1930s, and the double-L version followed a decade later.

Prior to that, Allison sometimes appeared as a surname, place name, and occasionally as a masculine given name.

Alison has ranked in the girls’ US Top 1000 every year from 1942 to the present day; the same is true of the double-L version from 1946 onwards.

Or maybe Mary Jane Hayes gets the credit.

Born in 1930, Hayes won a beauty pageant in 1949, and made her way to Hollywood shortly thereafter. By the time she made her big screen debut, Hayes had a new first name – Allison. Hayes worked steadily in the 1950s, just enough to lift the name and make it feel feminine.

Here’s the set-up: Allison Mackenzie lives in the small town of Peyton Place, New Hampshire. Her mother, Constance, owns a clothing store. In the novel, her unusual name comes from her father – also named Allison. They change the dad’s name in adaptations, but the basic plot remains intact. He never married Constance, died a few years later, and the mother and daughter are going it alone – and keeping her illegitimacy quiet.

The bestselling novel was published in 1956. A sequel and movie adaptations followed. Then, in 1964, a young Mia Farrow appeared as Miss Mackenzie on television.

The show became an instant success, the stories of small-town drama and intrigue dominating the ratings.

It faded post-Peyton, but only briefly.

Elvis Costello recorded “Alison” in 1977. The Gin Blossoms and the Pixies used the name in song titles, too.

1985’s The Breakfast Club cast Alexandra “Ally” Sheedy as a character by the name – though she’s seldom referred to as such. Counting up fictional Allisons makes a nearly impossible task.

Mexican telenovela star Allisson Lozz introduced yet another possible spelling of the name in the early 2000s.

All of this makes for a modern staple – a name in steady use for recent generations, though unusual a century ago.

Do you think this name is dated? Or does it still work a child born today?