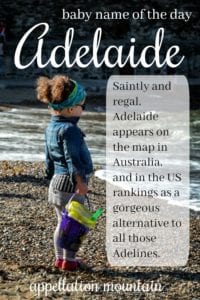 Adelaide sounds regal and vintage, a sister for Eleanor, an alternative to Charlotte.

The Germanic Adalheidis gave us the stylish Alice and the homespun Ada, spunky Heidi and sweet Adeline. Or at least, they’re all cousins, found on the same family trees.

It comes from the elements adal – noble – and heid – type. So girls by this name are the noble kind, high-minded and perhaps a little bit privileged, too. That’s exactly what the name sounds like, too.

Plenty of early bearers of the name were born to the tiara.

Adalheid von Burgund was born in 931. She married the King of Italy; after he was killed by his rival, she refused to marry the son of her husband’s assassin, and fled instead. Eventually she married again, this time becoming Holy Roman Empress. She’d eventually serve as regent for her grandson. Because she used her position to help the poor and build churches, the dowager empress was eventually recognized as a saint. Her life story inspired operas by Handel and Rossini, and Judy Chicago included her in the art installation “The Dinner Party,” a work about the important women of history.

Here’s the game-changer: in the nineteenth century, King William IV of the United Kingdom married a German princess called Adelaide, and the name caught on with English speakers at last.

Sure, she reigned. But she also proved quite popular. Adelaide was known for her grace, her generosity, and her devotion to her faith. The monarchy was in a bit of a muddle, with a decided lack of heirs. None of the royal couple’s children lived more than a few months.

William was ultimately succeeded by Queen Victoria. It’s said that the childless royals were always kind to their niece; indeed, Victoria’s firstborn was named Princess Victoria Adelaide Mary Louisa. The name has been in use in the royal family ever since.

The good queen also inspired the name of the capital of South Australia, founded in 1836.

That puts this name on the map, just like Brooklyn and Savannah. With so many place names in the US Top 1000, the tie to the Australian city can only bolster the name.

Adelaide: By the Numbers

It may be that the queen inspired parents, but we can’t known for sure. She died in 1849, a dozen years after her husband died and Victoria ascended the throne.

When the US rankings were first established in the 1880s, it appears that Adelaide was already falling. By the 1940s, the name had exited the Top 1000 entirely.

That seems impressive, but consider this: Addison, Adeline, Adalyn, Adalynn, Adaline, and Adelyn are all far more popular. The rise of Addie names – which followed all those Maddie names – probably deserves credit for some of this name’s resurgence.

Whether that’s a problem or a plus is up to you. Addie will get lost in the crowd. Despite that, Adelaide remains a style stand-out, a name that few other names resemble too closely.

If you’re looking for a name as classic and flexible as Elizabeth or Katherine, but slightly less common, this could be the perfect choice for your daughter.

What do you think of Adelaide? Do you like another Addie name better? And Australian readers, tell me – is this too wedded to the city to be used as a child’s name there?

This post was published originally on November 10, 2010. Following substantial revision, it was re-posted on February 28, 2018. 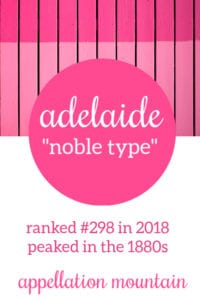