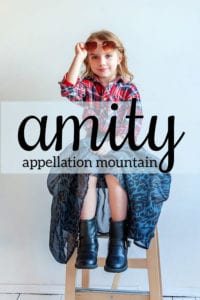 File Amity with the vintage virtue names that sound fresh and intriguing today.

Thanks to Sharmila for suggesting our Baby Name of the Day.

YOU’VE GOT A FRIEND

The name comes from the Latin amicus – friendly.

Parents are wild about Grace, and Felicity and Mercy are enjoying more use today than in prior years. And Promise debuted in the US Top 1000 recently. There’s a place for names that feel worthy, if not specifically spiritual.

It sounds like the kind of name you’d expect to hear at Plymouth Rock. But the story twists and turns.

In the early Middle Ages, Amicus – the Latin word – appears as a given name in Europe. Feminine form Amice has a good run, too. (Though Amos, Ambrose, and other Am- names aren’t all related.)

As a given name, it’s tough to pin down the first-ever Amity. But Curiosities of Puritan Nomenclature lists two.

And, of course, while we imagine Puritan parents choosing between Flee-Fornication and Humiliation, the truth is that even religiously observant families often named their children things like Ann and John.

Still, it seems like Amice and Amicus were mostly forgotten when Amity re-surfaced in the 1600s.

The name appears in sparing use in US Census records over the years.

In fact, the name appears on the map throughout the English-speaking world. And some of them are far more famous than others.

In 1975, a giant shark terrified a seaside town in the first-ever summer blockbuster: Jaws. The name of that town? Amity Island. (The 1974 novel set the events off the coast of Long Island, New York, but the movie was filmed on location in Martha’s Vineyard, Massachusetts.) It’s a fictional place, but an unforgettable one.

And then came The Amityville Horror, a 1977 novel turned 1979 movie. Sequels and remakes followed, the most recent in 2017. While it’s based on a real murder, the later stories veer farther and farther away from any actual events.

Between the shark and the haunted house, you might imagine parents steered clear of the name.

It seems like the movie mentions actually did propel the name up the popularity charts.

Another factor? Amy occupied the US Top Ten from 1969 through 1982. Amity almost feels like an elaboration of the shorter name.

That’s just a little higher in recent years. One possible reason? The young adult series Divergent gives the name to one of the five factions, or social groups.

If you’re looking for a meaningful name with a great meaning and a stylish sound, Amity might belong on your list.

Do you think the horror movie/shark connotations are an issue with this name? Or does the meaning and the sound outweigh those factors? 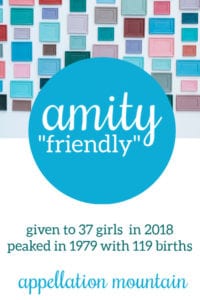