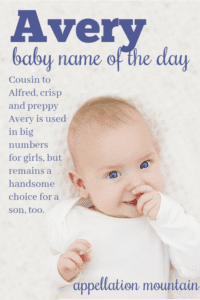 Avery belongs to a famous fictional newscaster’s mother – and son. The duo is back in the spotlight after many years away.

Back in the Middle Ages, King Alfred the Great held off the invading Danes. That was the 900s, more than a century before the Normans swept into England, transforming the language – and with it, given names.

The Old English name came from elements meaning elf and counsel. The king’s fame was such that his name survived the Norman conquest – or, at least, was sufficiently famous to be revived from time to time.

It transformed over the years, and surnames developed, including Alvery and Alvere, as well as the French Auvre, and, of course, Avery.

For as long as we’ve been recording given name data in the US, Alfred has ranked in the US Top 1000 for boys. The same is true for Avery.

Except their trendlines look very different.

Back in 1988, the world met hard-hitting journalist Murphy Brown. It was the age of Ashley and Courtney, so Murphy was different, but perhaps not an impossible stretch.

And then we meet Avery Brown, Murph’s mom. Veteran actor Colleen Dewhurst earned an Emmy for the role. She first appeared on screen in 1989, and the name more than doubled in use over the next two years.

After all, Murphy Brown wasn’t just a hit television series. It leapt into the real world news, too. And there’s a baby in the plot, Murphy’s son – who she names after her mom. By that time, Dewhurst had passed away, and the series chose to write her passing into the storyline.

But by the time the Murphy Brown reboot picked up in 2018? Mr. Brown is all grown up, and a reporter in his own right.

And his name? It appears in the Top 20 for girls. While it’s still in the boys’ Top 200, for many families, this name belongs to the girls.

Of course, it’s not just the Brown family who embraced the name.

Years before, EB White gave the name to Fern Arable’s brother in Charlotte’s Web. The novel was published in 1952; the enduring animated movie came along 21 years later.

Male characters in John Grisham thriller The Firm and television hit Nashville answered to the name. The novel debuted in 1991; the television series came along in 2012. The name remained reasonably masculine, and maybe slightly Southern, all that time.

American Dad! includes a character by the name, voiced by Patrick Stewart.

In 1996, Jerry Maguire’s girlfriend – the one who dumps him at the beginning of the story – also answered to Avery.

Since then, there have been too many to count.

There’s no mystery why this name caught on for girls. Just like Aubrey seemed a logical successor to Audrey, Avery combined the sounds of chart-topping Emily and fast-rising Ava.

Some argue that this name’s popularity for girls means it’s off-limits for our sons. But the numbers don’t bear that out.

If there is a girl penalty – a decrease in parents considering for boys because it’s perceived as too feminine – it’s not enough to put the name out of use.

Thanks to the surname, it’s also the name of a brewing company in Colorado and a crater on the moon. If you work in an office – or have ever set foot in an office supply store – you almost certainly know Avery Dennison. That sounds like a high school senior, but they manufacture an endless array of labels and other essentials, like printable name tags.

Preppy and crisp, this name has enjoyed considerable popularity for the last two decades, and shows little sign of disappearing – though it’s fallen in use slightly in recent years.

With a high profile masculine Avery back on the small screen, that might be enough to cement it among names like Jordan, Rowan, and Charlie that feel truly wearable for boys and girls alike.

Do you like Avery better for a son or a daughter?