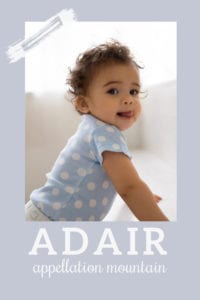 Thanks to Kristin and Leigh for suggesting our Baby Name of the Day.

Way back in the tenth century, King Edgar the Peaceable ruled England.

His name comes from the Old English ead – wealth. It’s the basis of a great many Ed- names we use today: think Edwin, Edith, Edward.

Like most Anglo-Saxon names, it didn’t survive the Norman Invasion.

But Sir Walter Scott gave the name to a fictional Edgar in his 1819 novel The Bride of Lammermoor. It’s a romantic tragedy; you might also know it from the 1835 Donizetti opera, Lucia di Lammermoor.

Scott’s novel typically gets credit for a resurgence in the name’s use.

Why all this talk of Edgar? It’s almost certainly the forerunner of the baby name Adair.

Drop the ‘g’ sound and it’s not such a stretch. Apparently the spelling Eadyear may help bridge Edgar to Adair.

CAPTAIN ADAIR and OTHER NOTABLES

The surname is in use from the 1400s onward, spreading from Scotland to Ireland to elsewhere.

In the nineteenth century, Captain John Adair made a mint in the US, then returned home to Ireland intent of building a palatial country home to rival the royal estate Balmoral. Adair’s Glenveagh Castle nearly succeeded. It’s now part of Glenveagh National Park.

Other notables to wear the surname include athletes and scientists, as well as:

In brief: main character Georgia was an eighteen year old slacker with a dead end job. She meets a bizarre accidental death, only to find that she’s been assigned to another dead end job – literally. Georgia becomes part of the local crew of grim reapers, responsible for helping souls cross over into the afterlife. Daisy Adair is one of George’s fellow reapers, a former Hollywood starlet who claims to have died on the set of Gone With the Wind.

The biggest reason to think the baby name Adair might succeed today isn’t a fictional character or any historical figure.

This raises the possibility that Adair could offer a similar-but-slightly-different option for a daughter or a masculine form for a son. Think of Milo and Millie, Isla and Isaiah. Names don’t have to share roots to rise at the same time. Sometimes a stylish sound can be every bit as powerful.

Speaking of gender, the baby name Adair is used is almost equal numbers for boys and girls alike as of 2019.

Ten years ago, the picture looked very different: 10 girls and 93 boys were given the baby name Adair.

Unlike many names, there’s no consistent trendline. The baby name Adair has shifted from more-masculine to more-feminine over the last one hundred years. But it’s always been in use, in small numbers, from the 1910s onward.

The “dare” sound lends it plenty of adventurous spirit. But history anchors it, too.

It might be a way to honor an Edgar on your family tree. Or it might simply be a bright choice for a child, graceful and appealing, perfectly in step with current trends but still a distinctive, unexpected choice.

What do you think of the baby name Adair? 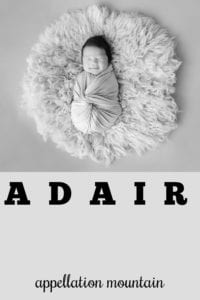