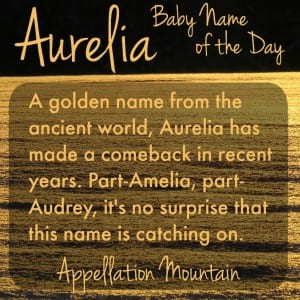 This post was originally published on August 17, 2008. It was substantially revised and re-posted on July 6, 2015. Thanks to Aurelia for suggesting her name for a rerun!

Part-Audrey and Aubrey, part-Amelia and Sophia, no wonder this golden name is making a comeback.

Thanks to Kayt for suggesting our Baby Name of the Day: Aurelia.

Back in 2008, I called Aurelia “one of those throwback names that is primed for a revival.”

The name regularly appeared in the US Top 1000 through the 1950s, but then disappeared – and stayed gone for more than five decades.

With names like Sophia and Aubrey so popular, it was only a matter of time before Aurelia made a comeback. In 2012, the name re-entered the rankings at #994. Aurelia charted at #832 in 2014. I think it’s safe to call Aurelia a name on the upswing! This name has truly ancient roots – older than Audrey or Sophia.

The Aurelii were an ancient Roman family. Julius Ceasar’s mom was an Aurelii – which means that she was known as Aurelia.

If you know your periodic table of the elements, you’ll remember that AU is gold.

In Latin, the precious metal is aurum, and aureus means golden. The family name and given name come from the same roots.

There have been saints named Aurelius, Aurelian, Aurea, and yes, Aurelia.

Aurelia of Strasbourg was a saint. Catholic sources make her a princess who became a hermit in the eleventh century, though historical details about her life are thin. A church named for her still stands in Strasbourg, though it has been a Lutheran church for centuries, and during the Reformation, the saint’s relics were removed.

Doubtless the saint is the reason the name can found in so many European languages. 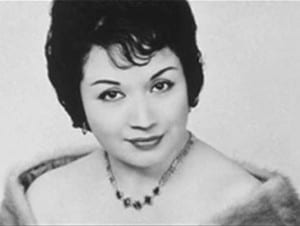 Maybe because Aurelia is used in so many languages, there’s no clear consensus on pronunciation. Despite being relatively rare in English, the name is heard in Portugal and Poland, in Romania and Rome.

In the US, you might hear aw REEL ee ah, aw REL ee ah, or aw REL yah. Others pronounce the name with an ah sound – ah REEL ee ah. And so on.

Aurélie is the French version. The emphasis is usually on the third syllable – oh rel LEE.

The Spanish Oralia had a good run in the US, charting in the Top 1000 between 1929 and 1957. Mexican opera singer Oralia Dominguez – that’s her to the left – was at the height of her career in the 1950s, but she was probably part of the trend, not the reason for it. Oralia is pronounced with a ‘ray’ sound: oh RAY lee ah.

If you’re looking for an alternative to chart-toppers like Olivia or Ariana, Aurelia hits many of the same notes.

What do you think of Aurelia? Do you think it’s an on-trend name that would wear well, or is this one not quite ready for a comeback?