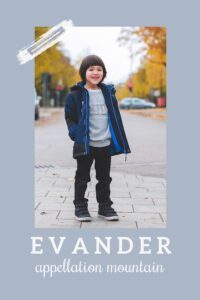 The baby name Evander looks like an Evan-Alexander smoosh. But it comes with a fascinating history all its own.

Instead, Evander shares root with Alexander.

Euandros comes from the Greek eu – good – and andros – man.

And so Alexander is defender of men, and Evander is just a straight-up good man.

Wouldn’t you know it?

The baby name Evander is hard to find.

Ancient myth tells us that Euandros was a good guy.

The Greek hero founded a settlement near what would eventually become Rome.

Evander hailed from Arcadia. Depending on who you ask, his dad was the messenger god Hermes or Mercury, or possibly just a regular ol’ king.

Regardless, the son did pretty well for himself – not only did he start a new city, he also introduced the Greek alphabet, their system of laws and justice, and their gods to the future seat of the Roman Empire. He also features in the events of the Trojan War.

Other Evanders were plentiful, including a scholar from Athens and another in Crete.

Little wonder the creators of HBO/BBC original series Rome picked it up as a character name.

Ancient names have always inspired parents. Colonial America had its share of men answering to Homer and Virgil and Hercules.

No surprise, then, that the baby name Evander is sometimes found in US Census records.

The baby name Evander might also serve as an English language equivalent of the Scottish name Iomhar.

Iomhar, in turn, comes from the Old Norse Ivarr.

There’s no linguistic connection. Instead, similar-sounding names were often used as substitutes across languages.

Despite a long history of use, the baby name Evander appears in only the tiniest of numbers.

Back in the late nineteenth century, the fabulously wealthy Evander Wall spent his fortune on clothing.

Wall would’ve been a social media-friendly socialite long before Instagram.

Later in life, Wall and his wife lived as expats in Paris, keeping company with figures like the Duke and Duchess of Windsor.

His extravagant name suits him, but it’s not clear why Evander Wall received his unusual name. His siblings answered to the more conventional James and Louise.

Born in Alabama in 1962, Evander Holyfield became a successful boxer. He won Olympic bronze in 1984. In 1990, he became the world heavyweight champion.

Holyfield’s success wasn’t enough to push the baby name Evander into the US Top 1000.

But lately, sound alone might take the name higher.

With Evan and Alexander so well-established, and names like Everett and Oliver so popular, Evander fits right in.

If you’re looking for stylish rarities, Evander could be the on-trend, under-the-radar name you’re after.

What do you think of the baby name Evander? 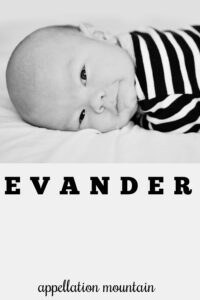