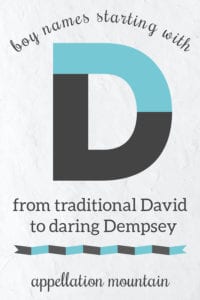 David comes to mind immediately. Daniel, too. More parents prefer boy names starting with J – or A, M, C, L, or E – but D names routinely appear in the US Top 100. It feels like a strong, solid sound for a boy.

Interestingly, there’s a whole category of trending D boy names. Think of Dwayne, Darrell, Daryl, and Derek – though the latter remains more popular than you might guess. They defined style in the middle of the twentieth century. Go back another twenty years or so, and you’ll find Dwight, Donald, and Delbert.

A handful of choices qualify as neglected classics. Douglas sounds rather dashing, and there’s something fun about Dale. Dennis rhymes with menace, of course, but Den seems fresh. And Denny sounds delightfully retro, as in Will Arnett’s new son – though he’s Alexander Denison, called Denny for short.

Tough guy names, especially Decker and Deckard – as in Shaw, of the Fast and the Furious franchise – are having a moment, too. But are they the Dwight and Daryl of 2070?

Only time will tell.

MOST POPULAR D NAMES FOR BOYS

There’s Daniel of the lion’s den, the Biblical hero. And then there’s Daniel Tiger, the beloved character from Mister Roger’s Neighborhood. The two figures show this name’s tremendous range. It’s darling on a child, but sounds capable and serious for an adult. Irish ballad “Danny Boy” means your kiddo has a built-in lullaby, and if that’s not your style, there’s always Elton John’s “Daniel.”

An evergreen classic, David ranked in the Top Ten from the 1930s into the 90s. That’s quite a run! Famous figures abound, from Bowie to Beckham; Chappelle to Copperfield – the real magician and the fictional Dickens character.

With ties to literary giant Thomas, musical genius Bob, and so many more famous figures, Dylan has attained modern classic status. A meaning tied to the ocean adds even more appeal. While this generation of parents might still think of Dylan as 90210’s bad boy, it has transitioned into a traditional, solid choice for a son.

Once reserved for boys born on Sunday, Dominic comes from a Latin phrase meaning “of the Lord.” Domingo means Sunday in Spanish; in Italian, it’s domenica. While it’s ranked in the US Top 1000 every year since 1894, it’s more popular than ever in the twenty-first century.

Thanks to a fifth century Irish saint, this name fits in with fellow imports Ryan and Brendan. It’s the real name of singer Elvis Costello, and until recently was far more familiar in the UK than the US. But lately American parents have embraced Declan, replacing former favorites like Dustin and Devin with this appealing name.

Despite belonging to a third century saint, Damian failed to chart in the US until the 1950s. One possible inspiration? Character actor Damian O’Flynn, who worked steadily from the 1930s onward. The 1976 horror film sensation The Omen boosted the name – even though it was spelled Damien in the movie. It’s even more popular in the twenty-first century, a longer boy’s name in the key of Julian, Sebastian … or Dominic.

The Spanish form of James, Diego brings to mind everything from artists like Rivera to Dora the Explorer’s cousin to the southern California city named for the saint. The connection between James and Diego seems confusing, but here’s a sketch. The Hebrew Yaakov became the Greek Iakob, which eventually became Iacobus and Iacomus in Latin. Iacomus eventually gave us James. Meanwhile, Iago developed in Spanish; Santo Iago meant Saint James. That led to Santiago. Split Santiago differently, and you’ll arrive at Tiago, Thiago … or Diego.

Dean Martin and James Dean make this name feel effortlessly cool. Harry Potter, Gilmore Girls, and Supernatural make the name familiar to this generation of parents. It’s brief and bright, a name that feels somewhere between a twentieth century trend and a modern traditional.

Surname name Dawson comes from David. It might’ve caught on thanks to the rise in names like Jackson and Mason. But 1990s television series Dawson’s Creek turbocharged it. The WB teen drama followed a group of friends, including James van der Beek as Dawson Leery. Parents took note, and the name shot into the Top 200 during the series’ run. It’s back on the rise again, thanks to our love of so many -son ending surnames.

Yes, Derek. It evolved from Germanic names like Theodoric. Derek peaked in the 1980s, but all these years later, it remains more popular than many other boy names starting with D.

ONE SYLLABLE D NAMES FOR BOYS

Dane might be a cousin to Dean, but it brings to mind someone from Denmark. Or maybe Dane Cook, the actor and comedian.

Short for French surname name Dashiell, Dash was boosted by Disney-Pixar’s The Incredibles, the original and the sequel. It’s active and energetic, a verb name that feels very wearable. Similarity to Cash and Nash helps, too.

Dax Shepard’s unusual given name came from a novel – Harold Robbins’ The Adventurers. The name owes some of its popularity to Shepard, and some to our affection for names like Max and Jax.

It might come from Devin/Devon, two 1990s favorites both still in the US Top 1000. But Dev also refers to god in Sanskrit, making it a culture-spanning option.

Retro cool Dexter comes in at #476, but just Dex fails to chart. It’s big in the Netherlands, where mini names like Sem, Bram, and Daan are chart-toppers. In the US, it feels more traditional than Jax, but not quite as traditional as Max.

It looks like a bird, but Dov is Hebrew for bear.

It means dragon … or male duck, depending on the language. But what Drake really means to most pop culture observers is teen actor turned wildly successful rapper. The Toronto musician has won four Grammy Awards, and is among the world’s best-selling artists.

Originally short for Andrew, Drew feels like an independent name. Maybe that’s because of notables like Drew Brees, Drew Carey, and Drew Scott – only the last of those three is actually an Andrew. While the name peaked in the 1980s and 90s, when Andrew reached the US Top Ten, it remains a solid choice for a son, the big brother to Chase and Cole.

Duke brings to mind European aristocrats – and American royalty, thanks to John Wayne. Or, maybe, it’s all basketball to you, thanks to athletic and academic powerhouse Duke University. It’s short, distinctive, and rising in popularity, too.

Depending on your perspective, this name is either the beginning of Frank Herbert’s best-selling sci fi series, or a beachy nature name. Either way, it’s edgier than Luke or Jack, but still very wearable.

It looks like day, but it comes from a Celtic word meaning “to shine.” It also has roots in Japanese, Vietnamese, and Swahili. Such a short name crosses language barriers effortlessly. One challenge in the US – our familiarity with Kai suggests this name sounds like dye – which might cause some confusion.

An ancient name in the key of Atticus, Darius also offers a great meaning: possessing goodness. It was big with Persian emperors, and remains in steady use beyond the English-speaking word in various forms. Dario, the Spanish and Italian form, currently ranks in the US Top 1000.

A surname related to oak trees, Darrow carries all of that strength. It brings to mind early twentieth century attorney and reformer Clarence Darrow. The sound fits right in with so many o-enders parents have embraced in recent years.

Twentieth century author Dashiell Hammett puts this name on the list. It was his mother’s maiden name, though the meaning is lost to time. While high energy nickname Dash makes the Top 1000, this longer form remains just outside the rankings.

A good-natured Irish surname name, Dempsey fits right in with Riley. But it leans masculine, possibly thanks to legendary boxer Jack Dempsey, who reigned as world heavyweight champ from 1919 to 1926. His popularity helped pioneer the idea of putting sports on television.

We heard Dodge and think Ford and Chrysler. But Dodge started out as the surname of brothers Horace and John. The entrepreneurs starting building automobiles way back in 1914, and their brand continues more than a century later. Their surname started out as a nickname for Roger, or sometimes George. Despite the occasional use as a first name, Dodge remains rare – but very appealing in our age of short, active boy names.

A brother for Dempsey, Doyle sounds upbeat. But it also brings to mind author Sir Arthur Conan Doyle. Given the enduring popularity of Doyle’s Sherlock Holmes, perhaps some fans would consider the surname as a tribute.

Harry Potter’s chief tormentor – well, if you overlook Voldemort – was mean boy Draco Malfoy. It comes from the Greek for dragon. Like many Wizarding World names, it’s borrowed from a constellation. The name’s history stretches back millennia, though. In the seventh century BC, Athenian legislator Draco established the first written code of law. While it was an improvement over feuds, it was spectacularly harsh – hence, our word draconian. All of it lends Draco an intensity, but with names like Leo and Milo gone mainstream, it might still be wearable.

An occupational name in the key of Carter, Drummer started out as the surname of a musician. We tend to prefer our working surnames a little more obscure these days – yes to Bailey, Archer, and Chandler; no to Driver and Sailor. But that’s changing constantly, and there’s certainly space for Drummer to join Hunter and Baker in the rankings.

What are your favorite boy names starting with D? What’s missing from this list? 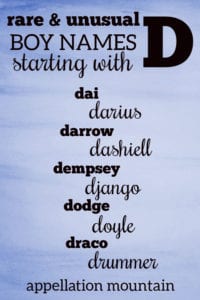 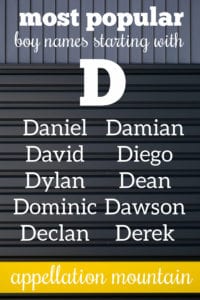 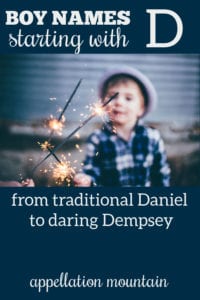