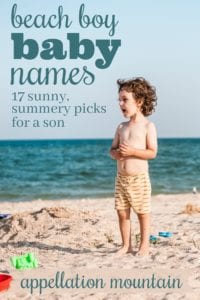 Beach boy baby names fit in perfectly with our love of so many great, inventive nature name choices.

They’re perfect picks for the lazy, hazy days of summer. Or if you love the ocean and the coast, they could be just right any time of year.

While certain categories of nature names, like flowers and even birds, tend to go to the girls, beach boy baby names make for quite a lengthy – and wearable! – list of masculine possibilities. And this is just the beginning. Famous surfers, like Taj, Duke, and Slater, work. So do the names of famous beaches. But for now, we’ll stick with choices (mostly) straight out of the dictionary, along with a few surnames that are too good to resist.

A color name, a type of window, and another word for howl, Bay makes this list thanks to yet another definition: an inlet of the sea. With River continuing to rise, it makes sense that beachy Bay would attract some notice. A recent ABC Family television series gave the name to a female character, but I think this works equally well for a daughter or a son. And from San Fransisco to Oakura and everywhere in between, famous Bays abound.

Beyonce and Jay-Z gave this name to a daughter, but Blue remains the color most associated with boys. Other blue-hue names include Indigo and maybe even Cerulean. Cher named her son Elijah Blue all the way back in 1976; Dylan Lauren’s son is Cooper Blue; Jamie Oliver’s youngest is River Rocket Blue Dallas; and model Lucky Blue Smith is dad to daughter Gravity Blue. Maybe it’s best in the middle spot, a bold, unisex option more intriguing than William or John. But if girls are Ruby and Scarlett, then I still think that boys could easily be Blue, too. Sure, the blues are a bummer, but you can also be true blue, and I think that puts this one in the modern virtue name category, too. And the connection between blue skies and the ocean blue? That’s why it makes this list of beach boy baby names.

A reader mentioned this one years ago, and I’ve loved it more as time has gone by. There’s a sharpness about Cove that makes it a promising nature name possibility for a son. Speaking in beach boy baby names terms, a cove is a small inlet. It’s worth noting that cove also refers to a person. It’s more outdated than fellow or chap, so I don’t think it’s a dealbreaker.

Sure, there’s a hint of science fiction about this name, thanks to the best-selling novels by Frank Herbert. But the large, protected piles of sand are also familiar sights to any beach-goer. They’re not exclusive to the coast; in fact, Great Sand Dunes National Park is found in Colorado, and they’re common in deserts, too. But that doesn’t take away from their beach boy baby names quality.

By far the most popular of the beach boy baby names, Dylan doesn’t immediately connect to the sea. Instead, it’s a Welsh name that brings to mind legendary singer-songwriter Bob Dylan. But it comes from Welsh elements meaning “great tide,” or more romantically, “son of the sea.” What’s certain is that Celtic legend gives the name to a character closely tied to the sea. It’s the choice for parents after a mainstream choice with ties to the beach.

At first glance, Finn is another name from myth – Irish in this case, as in Finn MacCool. But fish – and sharks and dolphins – have fins. The name and the word aren’t related, but it’s easy to think of Finn as a sea-faring name. In fact, The Hunger Games gives us the heroic Finnick, who fought with a trident and nets to represent his home, a fishing district. Goldfish crackers gave the name Finn to their mascot. Like Dylan, it’s a mainstream favorite. But it also claims a close connection to the ocean.

The concept of shelter and protection is an appealing one. A harbor protects ships from rough waters. That puts Harbor in the company of modern virtue names, like Journey and Sage. It reads unisex, though perhaps the popularity of literary surname Harper is pushing the sound-alike Harbor slightly to the girls’ side. Still, this name remains rare and makes an appealing possibility for a son or a daughter.

Hurley comes from Murley, a Gaelic name meaning sea tide; it’s cousin to the equally marine Muriel. As fate would have it, Bob Hurley became an outstanding surfboard shaper in California back in the early 1980s. He helped bring Australian surf brand Billabong to the US, and eventually founded his own label, Hurley. The company is owned by Nike today, but still makes all manner of surf apparel and such. If you love Riley, but feel it’s too familiar, Hurley might make a logical substitute with the ocean ties as a bonus.

A generation of Kyles and Tylers smoothed the way for Kai. While it claims international roots, it’s most familiar as the Hawaiian word for the sea. Though given the connections between the fiftieth state and the ocean, nearly any Hawaiian name feels at least slightly at home on among the waves.

We’re not using Mariner as a given name, but maybe we should! It comes directly from the Latin marinus – sea. Now that Maren ranks in the girls’ Top 1000, Mariner might make a more masculine choice, as well as a wholly unexpected one.

Another Irish surname, Murphy brings to mind cozy pubs and, of course, fictional newscaster Murphy Brown. (Candice Bergen is set to reprise her popular television character in a fall 2018 reboot.) But it means sea warrior. That makes Murphy right at home with beach boy baby names.

File this one somewhere between Blue and Mariner. It’s rising in use for our children, especially our daughters. That’s probably because color names tend to trend feminine. (I’m looking at you, Ruby and Scarlett!) But since the Navy is a military branch, there’s something rather capable about this name, too, and I think that keeps it just on the right side of unisex.

Three-syllable Océane has made waves in the French-speaking world for girls in recent years.  (Pronounce it oh say AHN.)  But that doesn’t mean Ocean is out for boys.  Oceanus featured in Greek myth as one of the Titans, the father of the many deities who guarded rivers and springs and other bodies of water.  Oceanus Hopkins was the only baby born aboard the Mayflower on its journey to the New World.  Actor Forest Whitaker named a son Ocean Alexander, and environmentalist and food activist John Robbins gave the name to his son, too.  (Ocean Robbins is now all grown up and has two boys of his own, named River and Bodhi.)

The beach means summer, and summer means the rays of the sun. Or, perhaps more literally, stingrays. The name Ray isn’t related to any of these things at all. It’s most often short for Raymond, with Germanic roots. Spell it Rey and it’s the Spanish word for king, as well as Star Wars’ newest heroine. Still, I think Ray works as a cool, retro, and casual, beach-ready boy name.

In simplest terms, a reef – often composed of coral – is a natural formation found in shallow water. They tend to be amazing habitats, homes for all sort of ocean life.  On sound alone, Reef seems like a promising name possibility.  When you picture the energy of divers exploring reefs, it seems even more appropriate for a child.

Maybe Sailor Moon deserves credit for helping parents see this as a given name instead of an occupational title or aspirational hobby. Or perhaps Sailor picks up on our long-running love of Taylor. (After all, Saylor-with-a-y ranks in the current US girls’ Top 1000, a mark that Sailor has missed.) Either way, Sailor feels like an on-trend name that could easily appeal to parents inspired by the sea.

Way back in 1998, former model Kelly Bensimon named her daughter Sea Louise. It didn’t catch on, even after Bensimon appeared in a few seasons of The Real Housewives of New York. There’s an elegant simplicity to Sea, and yet it’s not exactly a simple name. The image is boundless. It also brings to mind initials-as- names, like Kay and Jay and Bea, as well as mini names like Mae and Kai.

How do you feel about these names?  It is a category you would consider for a son?  Which names did I miss? 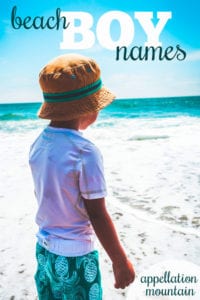 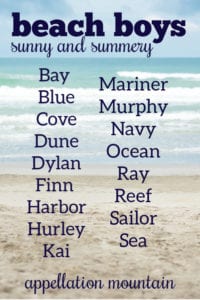