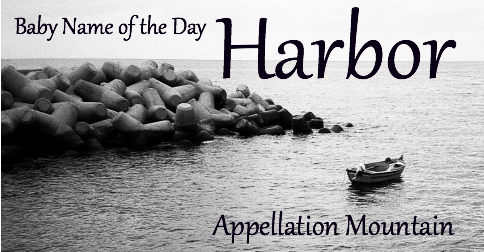 Harbor is a nautical nature name with a subtle virtue vibe. Could it catch on?

The word originally referred to temporary quarters for people – an army’s camp, for example. But by the thirteenth century, a harbor also referred to a naturally occurring shelter for ships along the coast.

This makes it something of a nature name, though it’s been possible to artificially construct shelters for centuries – and often a port, for loading and unloading cargo from ships, is constructed within an existing harbor, adding additional safeguards.

It’s been a verb since at least the 1300s. And at some point, it became possible to harbor thoughts instead of physical things, like men and boats.

Harbour is the British English spelling. Both spellings sometimes appear as surnames, sometimes occupational names for someone who operated a boarding house or inn, from the word’s older sense.

A ship at harbor is safe, protected from storms, sheltered in the calm waters. That’s why this name takes on a virtue vibe.

Virtue names aren’t new. Some, like Grace, have long histories of use. Others feel a little more obvious, tied to the Puritans, though Prudence and Mercy have both attracted interest in recent years.

But there’s a whole class of modern virtue names, and Harbor belongs in their company. Chance, Haven, and Journey have been popular in recent years, with names like Valor and True attracting attention, too. Most of these are at least potentially gender neutral, though use tends to divvy them up – Chance is almost certainly a boy, Haven is likely to be a girl. 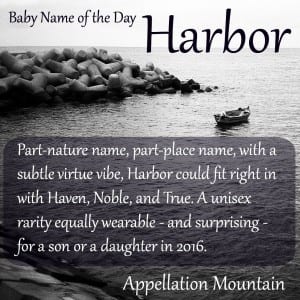 If the names’s virtuous vibe doesn’t appeal to you, maybe its status as a place name will.

I’m leaving off dozens and dozens more, but what it all means is this: it’s very possible to take inspiration from one of the countless places around the globe.

Harbor: By the Numbers

But is anyone actually using this as a name?

Perhaps it trends slightly feminine because of the popularity of H surnames for girls, like the very similar Harper. (And I think the potential for confusion with Harper is a concern.) I’m inclined to give this one to the boys, though Bay and Ocean feel perfectly unisex to me.

With ties to the natural world, a tremendous number of noteworthy places, and a virtue vibe, it’s easy to imagine bold baby namers embracing this word as a child’s name. And we could be just one fictional character/child star away from this one catching on.