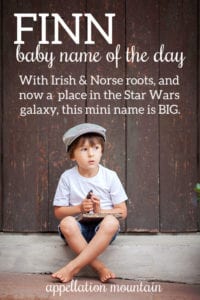 This name reads Irish, and indeed, it comes from the Gaelic Fionn mac Cumhaill. He’s a major figure in legend and lore, a warrior and commander. MacCool performed the requisite feats: outwitting an evil fairy, catching an enchanted fish, pursuing a maiden transformed into a deer.

Legend has it that Finn is not dead, but merely sleeping, and will reawaken and protect Ireland in her hour of need. Some scholars suggest that the title of James Joyce’s Finnegan’s Wake is a slurring of the phrase “Finn again is awake.”

A similar name occurs in Old Norse: Finnr. It originally meant wanderer, but for generations has referred to the people of Finland.

Both the Irish and the Norse can be the source of the surname.

The most famous Finn in the last century is Mark Twain’s creation, Huckleberry. Twain introduces him as the juvenile pariah of the village … the son of the Town Drunkard. Huck’s trip down the Mississippi with runaway slave Jim is etched in American literary history.

While there’s no need for a formal name, options abound: Irish surnames and given names like Finley, Finnegan, Finbar, and Fintan make obvious choices. Finnick appeared in both The Hunger Games and Zootopia, which makes it very modern – but perhaps increasingly wearable as the years go by.

As for Phineas or any of the various spellings – Julia Roberts is mom to Phinnaeus – these names come from the Bible. Phineas or Phinehas appears in the Old Testament, on two minor characters.

Griffin could be considered as yet another option.

It feels like a mainstream favorite today, but the name first cracked the US Top 1000 in the year 2000. Since then, it climbed steadily, thanks in part to pop culture.

There have been Finns in Buffy the Vampire Slayer and Gray’s Anatomy, The Sopranos and The 100. There’s an animated Finn in Adventure Time. Cars 2 gave the name to a James Bond-like race car. And the Pepperidge Farm goldfish crackers use this name for their mascot.

Celebrities have embraced it, too.

But the biggest boosts probably come from quarterback-turned-singer Finn Hudson Glee, the musical television drama that ran from 2009 through 2015. During that time, the name marched up the rankings, rising from #342 to #209. The actor who played the role, Corey Monteith, has since tragically passed away before the series’ finale.

And then came FN-2187, a stormtrooper who defies his conditioning to join the Resistance when Star Wars: The Force Awakens begins. We followed Finn through the second movie, and he’s set to return for The Rise of Skywalker. John Boyega plays the role.

If Glee helped keep this name in the spotlight, Boyega has transformed it, making it both traditional Irish legend and space age hero.

This name continues to gain steadily in use. With Star Wars such a major phenomenon, this name is now right up there with Luke. Could it reach the US Top 100? It makes a great substitute for casual-cool boy names like Jack. It’s easy to imagine lots of parents embracing this name – though given the popularity of longer forms of Finn, it’s possible it’s already far more popular than the numbers suggest.

Would you use just Finn, or do you prefer a formal version of the name? 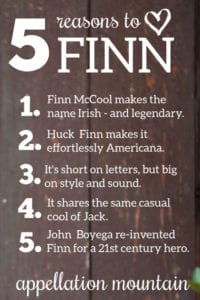