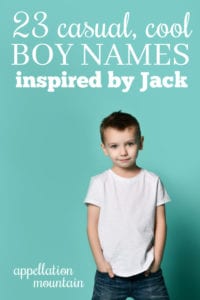 Are you all about casual boy names? With Jack ranking in the US Top 50 for nearly the past two decades, and rising as high as #1 elsewhere in the English-speaking world, it’s clear that many of us love this laid-back style. Jack feels traditional, but still approachable; capable, but also fun. You’d vote Jack into office or name him CEO, but you wouldn’t be surprised if your Jack were athletic or artistic instead. It’s an everyman name, one that suits the quiet, shy kid as well as it does an action hero.

The only downside, of course, is that Jack is everywhere.

Happily, there are more casual boy names that claim all those good qualities – but aren’t quite so common.

Ben – With Benjamin in the US Top Ten, gentle Ben feels traditional, but casual, too.

Luke – One-part Biblical boy, one-part old West, and at least as much heroic Jedi, Luke carries history aplenty, but still stays on the right side of formal.

Max – Once a grandpa name, today Max is thoroughly back, a mainstream choice for a modern boy. Maximilian and Massimo and Maximus all feel grand, but Max remains nicely modest.

Nate – Odds are you know a boy called Nathan or Nathaniel. But just Nate is more like Jack, a nickname with the potential to stand alone. It’s bright and strong, but traditional, too.

Sam – As much an everyboy name as Jack. Most Sams are really Samuel, but there’s something about just Sam that makes it a logical brother for Jack.

Theo – Like Charles and Nathaniel and Maximilian, Theodore sounds serious. A judge, maybe, or a scientist. But Theo is accessible, lively, and very handsome.

Tom – At just three letters, Tom ought to be forgettable. But there’s something clear and distinct about Tom, a simple name that feels surprisingly versatile.

Jude – Another traditional name little heard until the mid-twentieth century, Jude’s strong, simple sound earns a place on this list.

Lane – Lane’s bright, strong ‘a’ sound adds to its appeal.

Reid – A surname name with a strong sound, Reid fits right in with names like Max and Luke.

Zane – It’s like Lane, but turned up to eleven with a Z. Zane Grey penned many a novel of the American frontier.

Gus – Short for all those August names, but much cozier.

Hank – Forever tied to baseball because of Hank Aaron, it has the same strong sound as Jack.

Harry – Like Hank, Harry comes from Henry, a casual spin on a classic name.

Ike – Who doesn’t like Ike? Today it’s most often short for Isaac, but the most famous bearer was born Dwight David Eisenhower.

Ray – Ray shines like the sun, reigns like a king, and carries all the soul of legendary musician Ray Charles.

Bram – Short for Abraham, Bram is big in the Netherlands. But in the English-speaking world? It’s all Stoker.

What are your favorite casual boy names in the key of Jack? 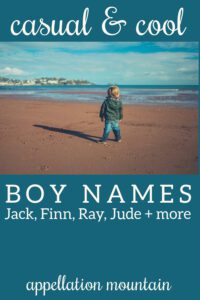