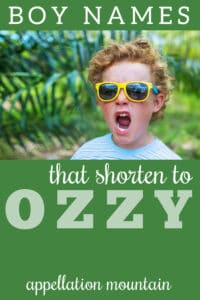 The nickname Ozzy feels like the next big thing.

Most of the famous Ozzys got their nickname via their last name.

Wholesome 1950s and early 60s sitcom The Adventures of Ozzie and Harriet is the exception. Based on the real-life Nelson family, dad Ozzie was born Oswald George Nelson.

The family enjoyed a long stretch of fame. The show originally debuted on radio, launched son Ricky Nelson’s music career, and inspired a film spin-off and later a 1970s-era  television sequel, too, titled Ozzie’s Girls. But that all feels a little like ancient history today.

The Black Sabbath lead singer scandalized audiences with his heavy metal persona during the 1970s. He was called the Prince of Darkness.

These days, he’s graduated to pop culture fixture. His family starred in a reality show on MTV titled The Osbournes. Ozzy is more of a doting grandpa than a heavy metal rock star these days. As the family has stayed in the spotlight following the show’s original run, it’s shifted the name’s image, too.

It all makes the name Ozzy an intriguing mix of cuddly and cool, and most definitely a baby name possibility.

But let’s imagine that you’d like something a little longer to put on your sons’ birth certificate. These formal names could shorten easily to the nickname Ozzy.

The sound isn’t exactly Oz … it’s more of a long O. And yet, Ambrose called Ozzy feels very possible. It helps that there’s not another logical nickname available.

The same logic that connects Ozzy to Ambrose works for Amos, too.

The letters aren’t there, but shorten Austin to Aus, and Aussie sounds a lot like Ozzy. Name watchers might know that Austin is a contracted form of Augustine. It’s more of a stretch, but possibly Ozzy could work for any of the August names, too.

While the Os sound is undeniable, Osbert isn’t exactly common today. This name is more Old English relic and less Rock and Roll Hall of Fame.

Besides the member of Black Sabbath, there’s another famous Osborne. Baseball Hall of Famer Osborne “Ozzie” Smith was a 15-time All Star shortstop in the MLB. His nickname? The Wizard of Oz.

A name from Irish legend, as well as a name with Old English and Norse roots, Oscar is nearly a classic. Actor and singer Mandy Moore recently welcomed her second son, Oscar “Ozzie” Bennett, a little brother for August “Gus” Harrison.

Also spelled Osmund, this is more surname than given name today. There was an eleventh century Saint Osmund, who came to England with the Norman invasion.

While Osric is another Old English choice, somehow it feels more accessible in the 2020s than Osmond or Osbert. An Osric ruled as an Anglo-Saxon king during the seventh century. The element os means god; it was wildly popular back in the day. Besides King Osric, the royal family included members named Oswiu, Osthryth, and Oshere.

A name with a little more potential, Oswald is familiar to Disney fans as the name of Walt Disney very first creation. Oswald the Lucky Rabbit is Mickey Mouse’s forerunner. Because Walt created the rabbit while working for another studio, he lost ownership of the character and it would be years before it returned to Disney’s control. But Oswald is also a name with a much longer history of use, regularly appearing in the US Top 1000 into the 1930s. It’s risen in use in recent years again, with 54 boys receiving the name in 2021 – the highest number since the 1930s.

Another saint and king from early medieval English history, Oswin would be forgotten. Except Doctor Who fans may think of Clara Oswin Oswald, sometimes known by her middle. Jenna Coleman played the part in the 2010s, making her one of the longest-serving companions of The Doctor.

Any names with the initials O.Z. could work, too. Owen Zachary, maybe? Oliver Zane, Otto Zachariah, Ocean Zeke. Maybe that last one sounds a little bit like a Cabbage Patch Kid? But it would totally work. Fun fact: the Wizard himself, from L. Frank Baum’s fantastic world, was named Oscar Zoroaster Phadrig Isaac Norman Henkle Emmannuel Ambroise Diggs. So Oz might come from his first name, or his initials.

What would you add to this list? How would you get to the nickname Ozzy? 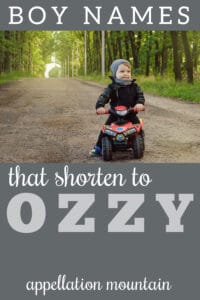