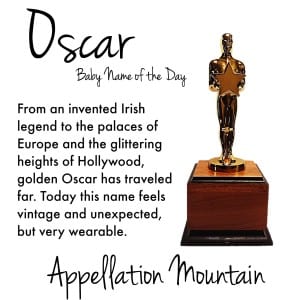 Today’s post was originally published on February 22, 2008. It was substantially revised and re-posted on March 30, 2015.

It’s a culture-spanning O name that feels both current and classic.

Our Baby Name of the Day is Oscar.

In myth, Oscar is the son of the fairy Niamh and the warrior-poet Oisin. This makes him the grandson of Finn MacCool. He’s a warrior, and a noble figure, too.

The legendary figure was popularized by eighteenth century Scottish poet James Macpherson. He claimed to have translated a series of epic poems written by a third century Gaelic poet, Ossian.

Macpherson most likely wrote every syllable himself.

Oscar appears in these works, and the works were widely read. Napoleon himself was a huge fan.

In the middle of the 1800s, the Swedish royal family had run out of male heirs. French-born Jean-Baptiste Bernadotte, a capable military commander under Napoleon, became King Charles XIV John of Sweden.

The king’s Paris-born son, Joseph François Oscar Bernadotte, became King Oscar I of Sweden in 1844 – from a work of historical fiction to the throne, in less than a century.

Literary giant Oscar Wilde was also named for the character.

By the late nineteenth century, Oscar was well-established as a given name in the US. It remained in the Top 100 through 1925. By the 1960s, Oscar had fallen into the 200s.

Pop culture brought this name back to us:

In recent decades, Oscar has gone from pan-European possibility to Latino favorite. Why? The name was already rising when Mexican-American boxer Oscar De La Hoya won gold at Barcelona in 1992, but De La Hoya must have helped.

And that brings us to another notable use of the name.

The Academy Awards were first presented back in 1929. The award itself is a golden statuette. There’s much debate about how the award got it’s name. Some credit Bette Davis. Walt Disney referred to the award as Oscar as early as 1932. Others credit a gossip columnist or a long-time employee of the Academy.

What’s certain is that the name was formally adopted in 1939, and has been synonymous with the awards ever since.

Oscar has fallen slightly, to #178 in 2013. And yet, there are lots of reasons to think this name would wear well. It has that vintage, ready-for-revival vibe. The ‘r’ ending is quite stylish. And Oscar strikes the right note for parents after a stands-out/fits-in name.

If you’re after a choice with a rich story and an on-trend sound that isn’t leaping up the popularity charts, Oscar is one to consider.