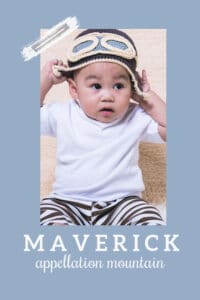 The baby name Maverick has gone from cowboy cool to flyboy to Top 100 favorite.

Inspired by the 2022 Top Gun sequel, it’s our Baby Name of the Day.

Tom Cruise played a character named Pete Mitchell. But you’d have to be a superfan to know that. Even Pete introduces himself by his call sign:

CHARLOTTE: “Maverick? Did your mother not like you or something?”

Of course, Charlotte has a call sign of her own. She’s Charlie, an astrophysicist and defense instructor at Top Gun.

As the hero of the movie, Mav suffers setbacks and heartache, but ultimately saves the day.

The action movie included plenty of drama, a soaring soundtrack, and a happy (enough) ending. Can’t remember the details? Kenny Loggins’ soundtrack song “Danger Zone” has the highlights, Ray-Bans and all.

As with any film so successful, it stayed in the public eye thanks to subsequent releases of the DVD, anniversary collections, and years upon years of speculations about possible sequels.

Because fans have been clamoring for a sequel ever since 1986. After several pandemic-related delays, the new movie debuted in 2022.

Top Gun: Maverick gave us the continuing story of Pete Mitchell. And, like the original, it’s also a hit.

There’s something uniquely American about the baby name Maverick.

But the surname Maverick? It appears in seventeenth century immigration records – at least in small numbers. At least some of the family can trace their roots back to Devon, in England.

Samuel Maverick died in the Boston Massacre in 1770 at the age of seventeen, a confrontation between British soldiers and disgruntled residents.

There’s a Maverick Square in East Boston today, name for the wealthy Maverick family – also named Samuel, and an ancestor of the man who made the name a noun as a rancher in Texas, centuries later.

Texas rancher Samuel A. Maverick refused to brand his cattle.

It’s said he didn’t want to inflict pain on his calves. Or maybe it was because Maverick could claim any unbranded cattle as his own. Other accounts suggest he just wasn’t that interested in ranching in the first place. After all, he was also a lawyer and politician. And he sold his herd later in life.

Whatever his reasons, the name “maverick” meant masterless by the late nineteenth century, and soon after, “independent” in a broader sense.

During the 1930s, his grandson, Maury Maverick, served as a congressman from Texas. Like his grandfather, Maury was known for his fierce independence.

The politician’s years in office track with the name’s transition from obscure surname to something bigger.

In the 1950s, ABC’s Maverick introduced us to a family of cool-headed gamblers, reluctant heroes of the Wild West.

Bret, Bart, Beau, and Brent all shared the surname Maverick during the show’s run, between the years 1957 and 1962.

Then along came the 2008 campaign for the US presidency.

Barack Obama would win, but before that could happen, McCain and his running mate, Sarah Palin, would adopt the term “maverick” for themselves.

Arizona’s McCain and Alaska’s Palin hailed from places that felt rugged and untamed. Even before he ran for the highest office in the land, maverick described McCain’s strong independent streak, often breaking with his party on key issues over a long political career.

It’s possible to imagine that “maverick” could have become an overtly political term tied to a single party. Indeed, a handful of conservative uses remain, more than a dozen years later. But it never really stuck.

After all, the hallmark of a maverick is … independence.

When we left Maverick, the television series, the year was 1959, and the baby name Maverick had just ended its last year in the boys’ Top 1000.

The name had fallen to near-obscurity by Top Gun’s 1986 release. Just 19 boys received the name that year.

A few years later, in 1994, the character of Bret Maverick was re-booted in a big screen movie starring Mel Gibson.

If anything, the McCain-Palin campaign caused the name to cool just a bit.

But pop culture associations with the name are strong. Besides the aviator and the gambler, the name is shared with an NBA franchise, a Ford pick-up, cigarettes, shotguns, a missile, and at least one roller coaster.

Parents view independent, free-thinking, and tough as positive qualities; the meanings of the name line up neatly with traits many of us would like to encourage in our children After all, Tom Cruise ends Top Gun a hero.

There’s a bit of danger in the meaning, too. It hints at an appetite for risk beyond what might be considered wise.

No names outpaces Maverick, though.

That’s the bad news. If you’re after a nonconformist kind of name? Maverick might be one in the crowd.

Still, it appeals for so many good reasons:

This time, Maverick is right in the title.

Could the name climb higher?

Another factor: we hear popular names differently. No one expects Grace to be a ballerina or Hunter to be a crack shot. As Maverick becomes even more mainstream, it retains all the positives of the name’s meaning, but feels a little easier to wear.

That makes Maverick the most wearable of the bold boy names.

The only real question is how high the name will soar.

What do you think of the baby name Maverick?

I hope the revisions indicate that I can change my mind – and be honest when I’ve been wrong. Oh, and, I hope it reminds us all that style changes, constantly, and today’s Hildegarde is tomorrow’s Abigail. And vice versa. 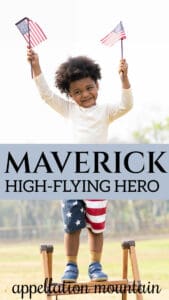 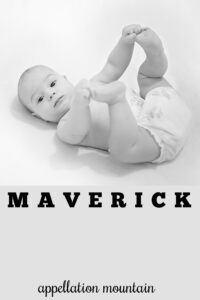