Thanks to Luisa for suggesting our Baby Name of the Day.

Back in the day, the word referred to a fleet of ships, from the Latin navis, ship. Navis gives us navigate and navigator, too. Eventually, the term was applied to a nation’s ships and personnel and sea power, in the broadest sense.

So that makes the baby name Navy thoroughly nautical.

British sailors wore it first. Some say they adopted the color blue because it signified trust. Or maybe it was simply the color of the sea. In any case, they started wearing it in the 1700s. By the 1800s, they’d lent the color its name: navy blue.

The blue worn by sailors has darkened over the years, to the color we think of today, an inky, almost black.

Some color names filtered into use as surnames. That’s true for Green and Pink and White and Brown, but even some you might not expect, like Scarlett. Add in foreign color names, and the number skyrockets. Many of those surnames made their way into general use as given names, at least some of the time.

But you won’t find Navy among them.

It first surfaces in the US name data in 1985, which makes this among the newest of names.

A handful do appear in US Census data beforehand. It might be short for a longer Nav- name, like Navarro or Naveed, or even a typo. While it’s difficult to say, at least some men and women probably did have the name.

What explains the transition from word to name?

In some cases, it’s clearly short for a longer name. Actor Navi Rawat was born Navlata. But despite her 1977 birth, Rawat’s first big role was in The O.C. in 2003.

Instead, it probably reflects parents’ cautious embrace of new color names. Blue and Indigo both debuted in the US data during the 1970s. Sky and Skye, nature names with a colorful vibe, rose dramatically in use during the same period. Amber found new heights in the 1980s, as did Jade and Sage. Perhaps this was simply the moment parents first considered a broad range of color names.

It looks like a spelling of the baby name Navy, but could Navi actually hold a clue to Navy’s success?

It’s also true that Navi means prophet in Hebrew; but it’s pronounced nah VEE. And it’s not clear if Navi is used as a given name.

In the 1960s, astronaut Gus Grissom nicknamed the star Gemma Cassiopeia – it’s the center of the “w” shape in the constellation Cassiopeia – Navi. He arrived at it by reversing his middle name, Ivan.

The popular Legend of Zelda video game series gave us a fairy named Navi, but that wasn’t until 1998’s Ocarina of Time. The character is mentioned in subsequent installments of the series, but it doesn’t seem like a powerful influence.

And then there’s the Na’vi, the fictional alien race we meet in 2009 blockbuster Avatar, now visited by millions of guests at Walt Disney World’s Animal Kingdom, where the fictional language and the blue-skinned creatures are alive and well. Again, though, it’s pronounced nah vee, not like the color.

NAVY in the SPOTLIGHT

Instead, possibly it’s pop culture that made the baby name Navy so compelling – even without using it as a given name.

Blockbuster Top Gun starred Tom Cruise as a naval aviator in 1986. Gap spin-off Old Navy opened its first stores in 1994. In 1995, the long-running legal drama J.A.G. premiered, set in the offices of the US Navy’s Judge Advocate General’s office.

Harmon, the name of J.A.G.’s main character, spiked in use during the shows’ run. And we all know how well Top Gun’s Maverick has fared as a boy’s name.

It’s not as if we discovered the branch of the armed services anew. But perhaps it showed in a particularly appealing light during the era. (Or not. The Tailhook sexual harassment scandal hit in 1991.)

What’s certain is that the baby name Navy name slowly caught on.

Celebrites, including Jason Aldean and The Dream have given the name to their daughters. In the latter case, Navy might nod to mom’s name, Nivea.

Navi and Navie have gained in use, too.

67 boys received the name in 2020, also representing a new high.

More than anything, the baby name Navy almost certainly owes its success to the chart-topping Ava. Other names, like Olivia, Evelyn, Ivy, and Avery, are powered by that middle-V, too.

In this light, it doesn’t take much to imagine parents falling for Navy.

It’s crisp and colorful. Navy brings to mind ships at sea. And while it’s perfectly feminine, it’s tailored and frills-free – a combination that appeals to many parents. It fits right in with Scarlett, Olive, and other colorful kid names, while representing something fresh and new, too.

What do you think of the baby name Navy? 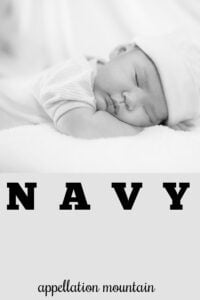