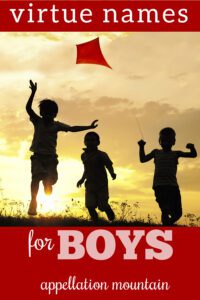 Virtue names for boys abound, and yet they’ve never claimed the spotlight quite like Grace, Hope, and Faith have for our daughters.

In some ways, that’s changing. Epic names for boys command the charts, with big, bold favorites like Legacy, Legend, and Reign gaining in use. Maverick ranks in the US Top 100, making this style of name downright mainstream.

Those aren’t quite virtue names, though – at least not in the most traditional sense.

A virtue is a good quality.

Maverick and Reign fit the broad definition of good, of course.

But virtue names for boys combine meaning with a degree of modesty. They sound like brothers for Grace and Felicity, timeless choices that convey unalterable ideals.

Still, it’s a fuzzy line. Some of these virtue names for boys might feel way too tough to live up to. And yet, aspiration is a key part of what makes virtuous meanings so great.

Friendly and enduring, Abel isn’t exactly a virtue name. Abel the name comes from Hebrew and means breath. Able is the word, meaning capable. But able makes Abel feel like one of the virtue names for boys. Go even further and use Capable or Capability – as in Capability Brown, the eighteenth century English landscape architect. Fun fact: Capability’s given name was Lancelot.

An arrow is a weapon, but it’s picked up a different sense thanks to the idea of an arrow flying straight and true.  Plus, the CW rebooted comic book character the Green Arrow with new television show Arrow in 2012, bringing it to a new generation. It’s also one of the names that edges a little bit closer to Maverick.

Summery and serious, this name comes from augustus – venerable in Latin.

We’ve been naming our children Avery for years, so why not Bravery? It’s a lot to live up to, but it’s undeniably a virtue. The name really shines in the middle spot – actors Benjamin Bratt and Talisa Soto named their son Mateo Bravery.

Brio comes from the Italian word for life. In music, to play con brio is to play with vigor.

Chance implies risk or maybe luck, neither of which counts as a virtue. But daring

An old school name that suggests both mercy and peace.

A name meaning always can take on a virtuous vibe.

Some train their entire lives to peak Everest.  The world’s tallest mountain isn’t exactly a virtue, but it does suggest both rigorous effort and reaching the heights.

Freedom appeared on the edges in the 1970s, and could appeal to parents today, too.

It’s a colonial surname, as in patriot Nathan Hale. But it is also a word meaning healthy or whole.  While it’s archaic, that might be part of why it seems wearable.

A harbor shelters for ships, making Harbor one of the possible virtue names for boys that suggests protection.

Like Hale, Hardy is a surname. Even as a surname Hardy has a virtuous meaning – courageous. While it’s possible to go too far and be foolhardy, overall the name suggests someone who is brave and bold – positive traits for a child.

Some virtues have very specific appeal; others strike a chord with nearly everyone. Justice seems like the latter. The Latin Justus comes with the same meaning and a long history of use, including a seventh century Archbishop of Canterbury.

Like Justice, this is a quality that most parents would embrace.  Unlike Justice, he’s pretty rare – just 42 boys received the name Loyal in 2012, compared to almost 500 baby Justices.

Meridian is a cartography term, ultimately from Latin, referring to noon – midday. We associate it with the idea of the highest point, just like the sun reaches the highest point in the sky at noon. It suggests achievement.

We talk of succeeding on our merits – our abilities. Like loyalty and justice, there’s something universal about the idea of merit and worthiness.

It literally means distinguished, but depending your background, it might make you think of the nobility – those born into titled European families. Back in the 1910s and 20s, Noble emerged as a given name with a virtue vibe. Maybe it’s due for a comeback.

Yes, Kim and Kanye gave the name to the firstborn daughter. The phrase “true north” has several meanings, including a poetic name for Canada. But when you find true north – which is different from magnetic north on a compass – it also means that you are navigating capably, headed in the right direction.  And so North fits with virtue names for boys.

Pax is the Latin word for peace, as the Roman goddess of the same. But the Jolie-Pitt family – as well as the name’s similarity to Max and Jax – make Pax a rare, but accessible, choice for a son. The English word Peace is more direct, and even less common.

There’s something gently old-fashioned about Prosper. It sounds like a brother for Mercy, found many generations back on a family tree. But it also brings to mind the Vulcan salute from Star Trek – “live long and prosper.”  Either way, Prosper belongs with virtue names for boys.

In its modern sense, Ransom seems like an outlandish word to use for a child’s name, all small bills in unmarked bags. Ransom, however, originally meant redemption. In Christianity, Jesus died to ransom – redeem – humanity from sin. While it’s rare, Ransom – like Noble – saw some use early in the twentieth century.

The Mayflower families used Remember for their daughters. But in our age of Remington and Remy, Remember is at least unisex, if not masculine.

It’s a virtue verb name! Revere connotes respect. Thanks to Paul Revere, it also has a founding fathers undercurrent, all silversmiths and midnight rides.

A word that means protection, and could wear as a given name, too.

In use for boys and girls alike, Sincere is an undeniably appealing quality.

It’s an herb and a shade of green, but it’s also another name for a man of great wisdom. Think of the phrase “sage advice.” A unisex favorite, it ranks in the US Top 1000 for boys and girls alike.

Pound sterling is the official currency of the United Kingdom. Sterling silver is silver of a specific quality. Sterling itself now means excellence, putting it among the virtue names for boys.

The very top of the top, a goal reached through significant effort.

True has been on the rise since the 1990s. Tru ranks in the current US Top 1000 for boys. A unisex name and a universally acknowledged virtue, other Tru- names include Truly and Truely (used for girls), as well as surname Truett, and fellow word name Truth.

Choices like Shelter and Prosper are gentle. Valor makes a more dramatic choice.

Wisdom seems like another quality we all seek, but this is even more obvious than Sage.

Worth fees preppy and buttoned-up, a family name passed down across generations. But Worth also means merit or value, putting this brief surname-style choice with virtue names for boys.

It’s a crazy name, akin to naming your baby Soccer. But Wrestling has a history of use among those outrageous Puritan parents, likely inspired by the story of Jacob wrestling with the angel.

Strictly speaking, Zen is a school of Buddhism. But in everyday English, zen is a state of calm.  It’s the second meaning – relaxed – that makes Zen a contender for a virtuous boys’ name.

It’s another borrowed term – this time from astronomy – that can mean the highest point or peak. If Summit appeals to you, Zenith might, too.

What do you think of virtue names for boys?  Do any of these meaning-rich names appeal to you?  Are there others that should be on the list?

What are your favorite virtue names for boys?