Thanks to Urban Angel for suggesting our Baby Name of the Day.

The baby name Everest brings to mind a colossal – and legendary – peak. But it actually connects nicely to a given name with plenty of history and a strong meaning, too.

Sometime around the year 100, Evaristus served as pope in Rome. While little of his backstory remains, the name persists in Spanish and Italian – Evaristo – as well as the French Évariste. While Everest isn’t directly related to Evaristus, it seems like a logical English form.

As for meaning, Evaristus comes from Greek. The first element, eu, means good, and the second, arestos, means pleasing. Ten boys were named Evaristo in the US in 2020, but the other two forms are virtually unknown.

The mountain’s name has nothing to do with Greek.

The highest mountain on Earth, the Himalaya’s Mount Everest stands over 29,000 feet tall, on the border between Nepal and Tibet. This lends the baby name Everest the sheen of a modern virtue name, signaling achievement – or maybe a sense of grand aspiration.

Of course, the mountain’s name is a subject of some debate. Locals call the peak Qomolangma, Chajamlangma, Sagarmāthā, Zhumulangma and Chomolangma. The native names were in use in 1856 when British surveyor Andrew Waugh put the mountain on the map. While the surveyors preserved local names elsewhere, in this case, Waugh insisted that wasn’t possible. Instead he suggested the peak be named after his predecessor as British Surveyor General of India, Colonel Sir George Everest.

Everest himself opposed the idea. Maybe he was embarrassed by the honor, but he was also concerned that Everest couldn’t be pronounced by the locals. The European name remains a sore point in the region today. The local names all translate to something along the lines of Holy Mother. Doubtless it feels insulting to have a random British surveyor’s name supplant a goddess.

But the name has stood all this time. As for Sir George, his family surname comes from Evreux, in the Normandy region of France. In turn, Evreux took its name from the Gaulish tribe that settled the area. And their name? It likely came from the tribe’s name for the yew tree. No matter what, the baby name Everest seems to lead back to the natural world.

French history includes the comtes d’Évreux from the tenth century onward. The US Air Force used Évreux-Fauville Air Base into the 1960s, and the French military has used it since.

Back to the mountain.

Scaling Mount Everest is no small feat, and many have perished in the attempt. Books and movies, as well as countless articles, have chronicled these tales. Jon Krakauer scored a New York Times bestseller in 1996 with Into Thin Air.  The Discovery Channel turned the trips offered by one company into a reality TV series in 2006 and 2007. In 2015, a major motion picture re-told the 1996 story, with Jake Gyllenhaal as the American expedition group leader. It was a commercial success, often debuting in IMAX theaters.

Perhaps this is one of the challenges with the baby name Everest. It suggests tremendous challenge and achievement, but also risk – and tragedy.

Disney World unveiled Expedition Everest at their Animal Kingdom theme park in 2006. It’s a thrill ride, but with a more fantastic bent – they’ve worked a Yeti into their coaster, one of the few perils not reported by climbers. It’s cemented the tie between Everest and adventure for millions of visitors who will never set foot in Nepal.

But never mind the Yetis.

The baby name Everest succeeds on sound, too.

We love a great middle V name. And Ev is enjoying a moment. Just ask Everett, a surname name with Old English roots that entered the US Top 100 in 2018.

A small number of boys have received the baby name Everest over the years.

Five boys were named Everest in 1914, perhaps because British explorer John Noel had attempted to reach the peak the prior year. The successful 1953 expedition of Edmund Hillary and Tenzing Norgay doesn’t seem to have had an impact.

But names changed over the next few decades.

What moved the needle on the baby name Everest?

In 2013, PAW Patrol debuted on Nickelodeon. The Canadian animated series introduced the world to a team of heroic pups. It’s currently at nine seasons and counting, with a movie set to debut in 2021. Ryder is the school-aged human leader of the canine crew. The dogs include Chase, Marshall, Skye, Rocky, Zuma, Rubble … and, starting in season two, Everest.

Everest specializes in snow rescue. She’s a Siberian Husky, of course. And yes, she’s a she.

While it seems like odd inspiration for a child’s name, the combination of factors – a stylish sound, the ideas about challenge and achievement, ties to the natural world – combined. And plenty of toddlers’ parents probably got used to hearing the name Everest on the screen around the time they were considering possibilities for a new baby.

It’s a name that feels rugged and strong. And it’s hard not to hear Everest and think of adventure and achievement. The name brings to mind the grandeur of the natural world.

And, given how very stylish and current it sounds, it’s easy to see why parents are embracing the baby name Everest.

What do you think of the baby name Everest? 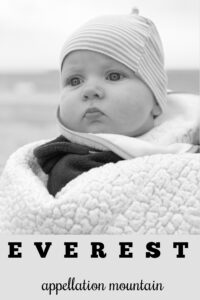