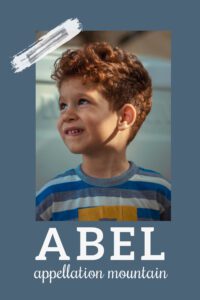 The baby name Abel comes straight out of the Old Testament, in the very beginning.

In the Book of Genesis, Adam and Eve have two sons, Cain and Abel.

And the brothers? They invent sibling rivalry, and Abel becomes the world’s first murder victim.

While it’s not a warm and fuzzy tale, it certainly gives the name plenty of history.

The meaning is usually given as breath, from the Hebrew hevel.

Others possibilities exist, and it’s possible that the story of Cain and Abel was influenced by a traditional Sumerian folk tale that pre-dates the Old Testament. But it’s equally true that the Cain and Abel story has influenced plenty of other stories over the millennia.

The baby name Abel sounds just like the word able.

No connection, though. At least not etymologically speaking.

Instead, able comes from the Latin habere – to hold, which led to habilis – easily handled. It became hable in Old French, which meant capable.

The ‘h’ remains in some English words, like rehabilitate – restore to its former condition. But it’s able, not hable.

Regardless of the separate origins, the word makes us think good things for the baby name Abel, too. It suggests that an Abel is skillful and clever, an intelligent and capable person.

A handful of famous bearers demonstrate that the baby name Abel has been in steady use across the centuries.

The future Saint Abel served as Bishop of Reims in the 700s.

In the 1200s, King Abel briefly reigned in Denmark.

Perhaps the most famous figure was Abel Tasman.

The Dutch explorer became the first European to reach New Zealand and the Fiji Islands during the seventeenth century. The Australian island state of Tasmania is named in his honor.

And then there’s an enduring fictional use of Abel.

TOM and GANCE and THE WEEKND

The twentieth century gave us some additional Abels.

German astrophysicist Tom Abel might not be a household name. But you’ll find an Abel crater on the moon, named in his honor.

Fast-forward to the twenty-first century.

The equivalent of a Nobel prize in mathematics is the Abel Prize, bestowed annually by the Norwegian Academy of Science and Letters and named in honor of celebrated 19th century Norwegian mathematician Niels Abel. It was first awarded in 2003.

And singer, songwriter, and producer The Weeknd started out life as Abel Tesfaye.

The baby name Abel has appeared in the US Top 1000 every year since 1880, the first year for which data is available, with the exception of 1905.

That’s not nearly as classic as James or John, but it speaks to the name’s long and steady history of use.

The twenty-first century brought some high-profile uses of the baby name Abel. Amy Poehler and Will Arnett welcomed a son named Abel in 2010. Perhaps more significantly, Sons of Anarchy gave the name to Jax’s infant son. The baby’s kidnapping and eventual return drove much of the story during the second and third seasons, in 2009/2010.

Accordingly, the baby name Abel rose dramatically in use.

That’s still reasonably familiar, but far from the heights of Biblical boy names like Elijah and Noah.

Friendly and accessible, the baby name Abel is immediately recognizable as a given name with long history. But it sounds like so many word names popular right now. It’s less intense than Legend or Maverick. It feels – and is – far more old school.

It’s a hit a plateau in popularity, which might make the baby name Abel especially attractive. It’s broadly familiar, but not too common. And it melds centuries of use with a very twenty-first century sensibility – an appealing combination for a child’s name.

What do you think of the baby name Abel? 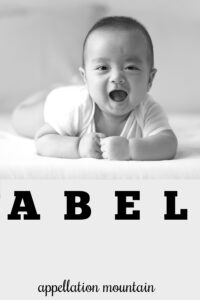