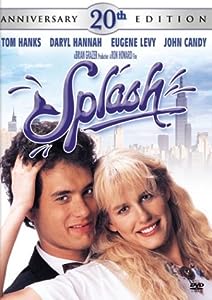 Note: I’d originally agreed to write about Keziah today, for Racheli. Except when I finishing up the post, I realized it sounded eerily familiar. Sure enough, that was because Keziah was Baby Name of the Day back in the day. Oops, and Racheli, my apologies!

She made waves as the adopted name of a big screen mermaid.

Our Baby Name of the Day is the much-maligned Madison.

The year was 1984. Tom Hanks was just a young actor cast in a romantic comedy about a man and a mermaid, years before he became an Oscar-winning A-lister. His co-star, the one in the flippers, was Darryl Hannah, equally early in her career.

You probably know the clip that inspires Hanks’ character to rename his fishy friend. They’re in a department store. She insists her name can’t be said in English, and he replies “Then just say it in your language.” Her high-pitched squeaks shatter the television screens.

They’re trying to find a non-glass-shattering alternative while they’re walking down Madison Avenue and, well, the rest is history. Splash was a huge hit, and Madison was on her way to the US Top Ten, with thousands of baby girls named after a mermaid who named herself after a street.

But it isn’t that simple – or that silly. In the 1980s, Allison and Megan were popular choices. Madison’s sound and style fit with names that were mainstream in the moment.

But there’s more: the classic Madeline was beginning her return. In 1978, Madeline ranked #704. By 1984, she’d climbed to #623 and by 1986, she’d reached #288. That’s easy to explain, of course – we were all watching Maddie and David on Moonlighting. A long-forgotten girls’ name was suddenly fresh and interesting again.

It was a pop culture perfect storm. Splash put Madison on the map, and Moonlighting prompted parents to consider other ways to get to Maddie.

The name wasn’t without roots. Founding father James Madison helped write the US Constitution, then served as president for a second act. (The street is named in his honor.) There’s also novelist Madison Smartt Bell, a novelist and one of many men to wear the name.

This brings us to one of the biggest controversies surrounding Madison. Why, oh why, must parents steal boys’ names for girls?

I understand the frustration, but I’m not sure the logic holds. In English, there is little custom of forming of surname to indicate “daughter of” as there is in other languages. Pippi Longstocking, for example, has Efraimsdotter included in her extensive appellation. Slavic languages, too, sometimes include matronymics.

But it does happen in English – and Madison just might be one of those cases. Madison’s son clearly indicates descent from an ancestor. That ancestor might be Matthew – Mad was a short form in medieval English, the equivalent of today’s Matt.

Or Madison could mean son of Maude – or, more broadly, Maude’s descendant. While it wasn’t as common as taking a name from your father, if your mother’s family was especially powerful, if your father was foreign, or perhaps if your father passed away before you were born, you could take a surname based on your mother’s name. Marriott is based on Mary or Marie; Beaton relates to Beatrice.

Parents weren’t using him for boys, but they were using tailored choices like Kristen, Erin, and Karen for their daughters. Little wonder, then, that Madison debuted in US Top 1000 for girls at #625 in 1985.

Madison reached the Top 100 in 1994, and peaked at #2 in 2001 and 2002. She’s fallen to #8, but that’s deceptive. From the original French Madeleine to respellings of Madison, there is no shortage of similar names in use today, like:

Interestingly, though, Madison actually rose for boys after it caught parents’ attention for their daughters. After decades spent dormant, from 1987 into 1999, Madison appeared at the fringes of the boys’ rankings, perhaps prompting those accusations of theft. Today, a son is more likely to answer to Maddox or Madden.

Something tells me that Madison, however reviled she may be on message boards, is actually another Jennifer – a name we never considered until she was so common that the name became perfectly ordinary. Twenty years from now, I suspect we’ll be hearing “I was one of three Madisons in my high school; I want my child to have an unusual name, like Gertrude.”

Or at least I can hope!